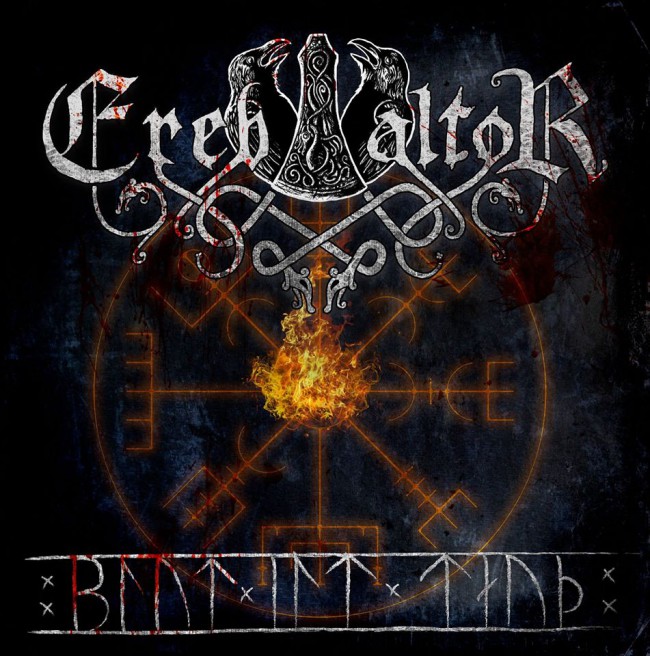 I’ve been a fan of Ereb Altor ever since I reviewed their first album, “By Honour” all the way back in 2008 (Christ, am I that  old?). Mats and Ragnar of Ereb Altor are also in the supremely excellent band Isole, and it’s never been a huge secret that Ereb Altor owe a sizeable chunk of their sound to the more Viking-inspired elements of the classic Bathory sound. I guess, therefore, that they have decided to put their influences front and centre on this release, which is a collection of seven Bathory covers, served up for your delectation.

Cover albums can be a funny old thing, in fairness. They can often be a sign that a band has run out of ideas, or is fulfilling some contractual obligation by knocking out some half-arsed versions of the songs they used to play in their earliest iterations as a pub band or whatever. This clearly isn’t the case here, as Ereb Altor are massive fans of Bathory, and the extent of that admiration is expressed in the quality of the songs. Opener “A Fine Day to Die”, from the Blood Fire Death album sets the bar, with a huge, modern yet organic sounding production that manages to retain some of the grit of the original, but with the kind of epic swell that one suspects Quorthon would have wanted if the production techniques were there to be had on his budget back in 1988. Next track, “Song to Hall up High”, originally from the Hammerheart album is also respectful, but ramps up the sound – choral vocals, vast echoing drums – to the extent that it’s more Epic than Conan the Barbarian reading Lord of the Rings on a round the world voyage. The clean vocals here stray into – and whisper this quietly – well sung territory, until it segues neatly into “Home of once brave”, also from the Hammerheart album. This takes a quintessential mid-pace Bathory stomper, with that simple but effective drum beat, and makes it an unmissable hymn. In particular, the guitar sound here is utterly spectacular, being a hypnotic wash that really accentuates the clean singing.

“The Return of Darkness and Evil”, from 1985’s “The Return…” turns down the Viking for a while, and presents a rendition of the original that leans heavily on the Motorhead and Venom influences of the proto-thrash/black source material. Black metal vocals accompany the drums – more Philthy Phil than Hellhammer, truth be told, but a neat presentation of the rockier elements of the Bathory back catalogue. “Woman of Dark Desires” from the “Sign of the Black Mark” album continues in the vein of the more black metal side of things, and while it’s a good interpretation of the original (though to my tastes the keyboards sound a bit cheap – perhaps by intention?), it’s not the finest song that Bathory produced, and there’s only so much you can do with none-too-amazing source material. “Twilight of the Gods”, from the album of the same name is a simply stunning arrangement by Ereb Altor. Taking the bombast and drama of the original, it’s impossible to listen to the opening drums and choral chanting and not be taken away in a flight of imagination. I’ve listened to the album at least a dozen times since getting it to review, and I will confess that this song gives me a chill down my spine every time I listen to it. Rounding things off is “Blood Fire Death” from the album of the same name,. It’s here that I think you can probably hear the concept of the album really well expressed; rather than being a simple copy of the originals, this album presents a reasonable facsimile, I think, of how the material would have sounded if the technology of today was available to Bathory back then. It has all of the – well, Blood, Fire and Death of the original, but with a clearer, more epic swell.

A Bathory covers album then, from a band that loves Bathory and has always worn their influences on their sleeve. At this juncture, I am going to heretically declare that while I have always acknowledged the song-writing skills of Quorthon, the production of the original material always left me a bit wanting. For purists, of course, nothing will ever beat the sound of Bathory, but to my ears, I actually prefer just about every song here to the Bathory versions.