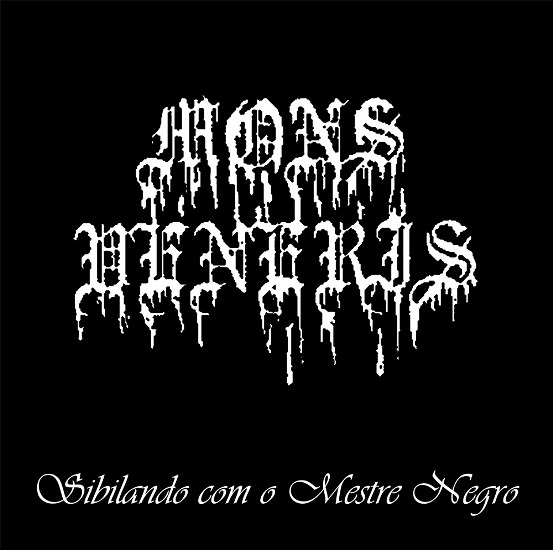 I didn’t realise Portugal had its own ‘black circle’ of like-minded artists but apparently it does. Personally I find the whole thing a bit of a schoolboy kvlt clique and don’t take much notices of such collectives but as far as black metal acts are concerned appreciate it gives it all a bit of an intrigue. Mons Veneris are practitioners within Portugal’s elite and have released a massive amount of material since forming in 2003. There’s a veritable stack of demos, splits, EP’s, one album and even a 4 hour cassette compilation to wade through if you feel so inclined. There are no members listed, no official web domains and little in the way of self-promotion for this veritable ‘Mountain of Reverence.’ I had never encountered them before and was intrigued by a description promising ‘raw, lo-fi’ black metal and ‘dissonant, tension-inducing palette of violin and classical guitar.’ Pressing play was however when things started to go downhill rapidly.

Here we have 11 ‘Untitled’ tracks which are mainly ambient and acoustic in nature. You get the violin straight off and it seems that the dissonant approach of it is utilised much in the same way as in horror soundtrack music, to unnerve and unsettle. Cackles, groans and moans are provided vocally and the whole effect is a bit like nails down a blackboard making it ghastly and uncomfortable listening. I can but wonder if this is the work of one person or if they have a chamber of horrors accompanying them and providing this classically backed nightmare. If this sounds like pure excellence to you and you are hungering to check it out let me assure you it is not in the slightest. I guess it is love or loathe it and despite a love of macabre and fantastical classical music and raw black metal I am definitely in the latter camp. I guess I can appreciate what the artist is trying to do and fair to say that they have achieved it but I cannot appreciate the tortured wails and obtuse disharmony coming out my speakers and fail to understand who else actually could. This is interesting enough to go and give it a listen and maybe to come back to it once to just hear how damn drab its atmospheres are but after that it’s simply painful. You certainly wouldn’t want to play this around any household pets, a dog would simply lie down and die and a cat would get its claws out and latch onto your face shredding it to bits a bit like the sound from the violin on ‘untitled 5.’

Things are broken up at the halfway point by some strange rumbling ambience sounding like it has been recorded in an underwater cavern. It’s quite relaxing actually and at least gives a break from the screeching strings.  The one question I still had on first listen was what Mons Veneris sound like on full BM mode and (un)thankfully this is answered with two tracks of thudding, muddy, beastliness. Hellish in a different way but equally horrendous it’s a seething cauldron of primitive, abrasive noise showing no shred of subtlety. I can imagine listening to a whole album in this style being equally as horrible an experience. Finishing off with some creepy organ work and some eccentric vocals it’s pretty much a relief when the album finishes but I can’t say it hasn’t been an interesting experience.