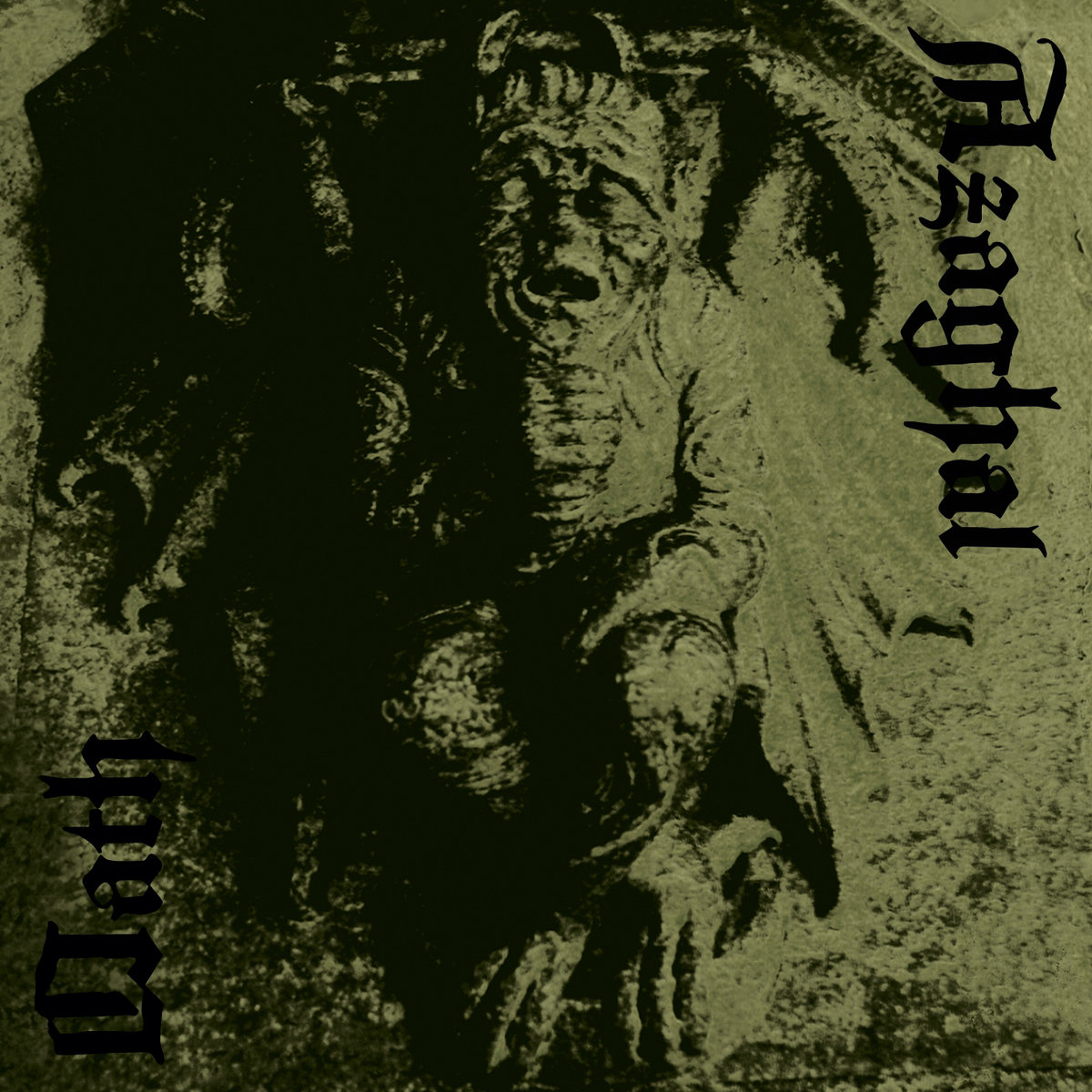 In days gone by when the black metal scenes were more or less at war with each other I always felt that in that battle of sonic diablerie the Finnish bands would come out on top due to their uncompromising wrath and inherent deviltry of their music. Azaghal is the most familiar within this split as each band delivers tracks of despairing malfeasance set within black metal, and wherever your allegiances lie within the genre Azaghal has been around virtually as long as the pioneers and have a release rate most bands would envy if honest as this year has already seen a full length the rather splendid “Madon Sanat” and a split with Ars Veneficium which I’ve not heard yet. With three songs Azaghal deliver what they do best, genuine blackened hostility set within the framework of a stripped raw sound that opens with nigh on ten minutes of “Nukkuja”. No intros here straight glacial potency as the riffing punches ice spears into your psyche as the drums, barely audible, shower the track with shards of slicing blackness. As the tune unfolds the tempo shifts around allowing a more mellow and melodic guise to be exposed by way of some melancholic guitar hooks that are nestled into the savagery. Even the bass which is also extremely low in the mix offers that extra dimension as the tune flexes between passages of all out perniciousness and more soporific poise. Continuing this approach is “Vedenpaisumus” which lures you on the predication that the song is less maligned only for you to be strangled by tendrils of riffing horror as the double bass crashes the song along remorselessly. The riff breaks are terrifying assaults and enable the song to ratchet up the evilness as their last track on the split, “Taivaankairaaja”, is far shorter and incendiary with a relentless pace and barbaric riff but still has an insane twistedness by dropping the tune in pace momentarily or inserting a ghoulish guitar hook that haunts the tune and ends their tracks brilliantly.

Oath are a new band to me and have a full length out plus a couple of EPs as their monumental two tracks included here span the double digit mark of sprawling and grandiose blackness. Whilst as quick as their compatriots on this split there is a softer edge to Oath’s music as “The King” starts their demonic duo. Also the band uses keyboards to create that epic pagan like quality that bands like and even Khors to certain extent do to such dramatic effect and you can add Oath to that list now. The inherent atmospherics are coupled to desolate vocal screams and dolent melodies as the track switches tempo for a double kick that listens like a soft rumble in the background and, like Azaghal’s tunes, is perfectly balanced as the transitions between speed and sobriety are seamless especially when the keyboards are inserted majestically into the song about half way in. There are choral like vocal effects used adding extra colour to a song that bristles with ingenuity that continues with their other offering “Evernight” which begins with a bone brittling riff and haunting vocal lingering in the background before the drums and bass are added to pad out the sound. The pace here feels more urgent and violent as the tune incorporates some deft guitar hooks that float within the body of the song like phantoms as the vocals are scarce but appropriately injected when done so and listen like demonised incantations than actual vocals per se. The acerbic and soul molesting nature of the track is tempered by choral vocals and keyboard adornments but still retains that affronting aura of dread much like this whole split showcases.