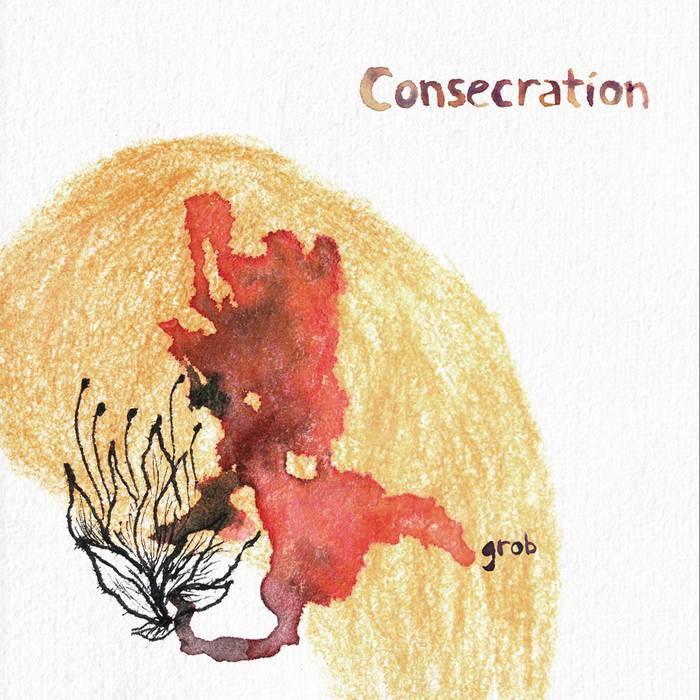 This album from Serbian band Consecration is the third of a trilogy. I only know this because I read it. Supposedly “Grob” (Grave) brings the end, peace and termination of a journey but my own impressions on listening to it centred around weightiness, depths and expanse. I can also say that it captured my interest from the beginning.

Although heavy and post metal like Neurosis or Cult of Luna, there is great sensitivity and imagination in this work. Immediately we are immersed in a dreamy soundscape from the cosmos but with industrial tinges. This is not some meaningless “intro” but the scene setting “Debeli Ieptir”. Calmly spoken words in what I presume is Serbian develop into a spooky dark atmosphere. The vocalist comes in. His echoing voice matches a sound which has the ring of Hawkwing in its psychedelic wooziness. Stylistically it’s post metal stoner doom but with whistling winds and a world of shadows and melancholy. From here we progress to “Sheed” and its aura of crashing gloom, enhanced by an array of all-embracing sounds. The whistling wind is there behind the crunching rhythm. Disharmonious echoes fit in neatly with this gloomy sludge. Consecration have clearly thought this through and understand the atmospheres they create so that they can accentuate them.”Sheed” slides along in a quite ghastly way. It’s intensely interesting with sounds coming from everywhere and adding to this bleak and harsh picture. I heard what sounds like a traditional accordion and with that 1970s feel, I sense that I’m going to take off …

“Sećanju na Amelju” (The Memory of Amelju) starts like a gloomier version of Cult of Luna. It’s as if someone died. The trumpet sounds – it’s another masterstroke as the trumpet reflects melancholy like no other instrument. It doesn’t get more desperate than this. We’re at the stage beyond melancholy. Quiet minimalism is the order of the day. It’s clear by now that Consecration are not going to let us off the hook with anything light. Also sprach Zarathustra. Consecration now embark upon the title track, taking time to pass through the cosmos. We listeners are led to stare inescapably into dark skies and float around. The enigmatically titled “Ejmi (1983-2011-201?)” reinforces this theme. A gloomy acoustic atmosphere descends. The backing line is reminiscent of Pink Floyd. It breaks out into controlled majesty, always sensitive, always atmospheric. The rising sadness matches the acoustic splendour. The soundscape is dreamy and introspective. The crunchy guitar line cranks things up. The vocalist sounds as if he’s in space. As at the beginning, the spoken word brings up back to earth and breaks up the atmosphere in a spooky way. As the gentleman utters his words deliberately, there is a delicate post metal ring in the air.

“Grob” is shatteringly good. It is creativity at its height. I have nothing but praise for the carefully constructed atmospheres which convey magic, even in melancholy and darkness. This is Consecration’s fifth album including the trilogy of which this is part. I’d suggest that not only is “Grob” worth exploring but so too are their previous works if this is the level of imagination and atmosphere they are capable of creating.