One Machine – The Final Cull (Scarlet) 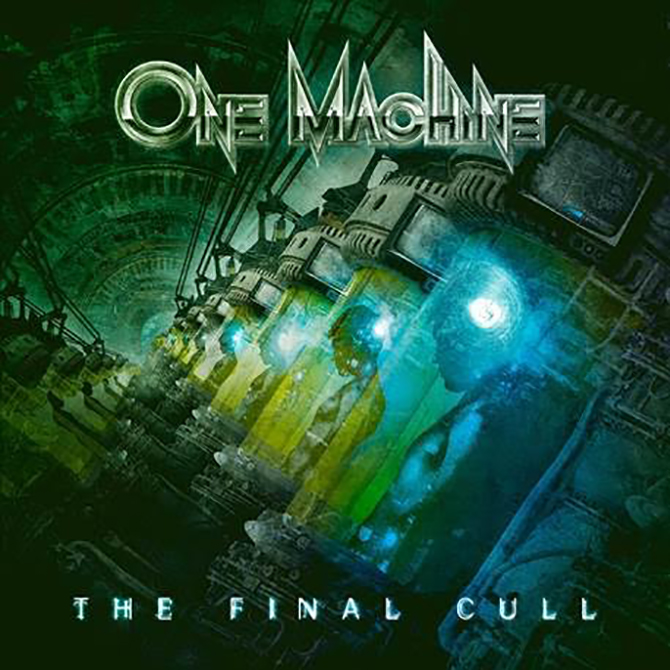 At first I thought this was One Machine’s first album, only to find out that ‘The Distortion Of Lies And The Overdriven Truth’ was released in February 2014 and ‘The Final Cull’ is actually their second album. One Machine is Steve Smyth’s baby, featuring Jamie Hunt and new members Stefano Selvatico, Michele Sanna and Chris Hawkins. While appearing to be London based, they comprise of two Italians, two Englishmen and the American founder, and all have released albums in their own bands before partaking in this project.

“Forewarning” opens with a solid guitar riff and a flurry of drums before Chris joins in on the vocals where he alternates between harmonious choruses and angrily shouted verses. Steve and Jamie trade leads back and forth at high speed with even higher precision that Michele does all he can to punctuate each bar end on the drums.

The epic sounding intro for “The Final Cull” is literally blasted away when the band join the fray and while there are mellow bridges Chris’s voice never falters as he hits the high notes and the almost non-stop leads carry on for almost the full 7 minutes.

A very quick lead is followed by a nice thrashy rhythm and more leads as Chris shouts his way through “New Motive Power” with plenty of passion and Michele’s snare cuts like a knife.

The sound of wind chimes and a sitar threw me a little here, but “The Grand Design” has a great but slow tempo as it plods along with Stefano’s bass notes buzzing through with power and a throaty rumble giving Chris a chance to sing in a slightly lower key.

The short sharp cymbal bashing and catching, progresses to become just bashing as “Screaming For Light” runs its course with a finely crafted set of leads.

The layers of guitar on “Born From This Hate” are reminiscent of Nevermore, as are the vocal wails and neither is a bad thing, believe me.

While listed as a bonus for Japan Only, I got “Computer God” on here and it ebbs and flows from chunky guitar riffs full of false harmonics and squeals to completely minimalist clean note picking giving Chris the chance show that his voice is powerful enough without the distorted guitars to carry it along. The lead solo is also pretty impressive.

“Welcome To The World” has Michele kicking up a storm as Steve and Jamie rip through some intense riffs causing Chris to let out some throat rasping shouts.

Then as a complete antithesis “Ashes In The Sky” has Chris crooning gently over the acoustic guitars for the first three quarters of the song before it finally builds up to the crescendo at the end.

The final track “Summoning Of The Soul” works the other way around as it starts off heavy then slowly fades to a near standstill before increasing the pace once again to end the album on a high note for both guitars and vocals.

It would also appear that the order of the songs on my album are different from what I see listed elsewhere, but I’ll just go with what I have, as that works for me.