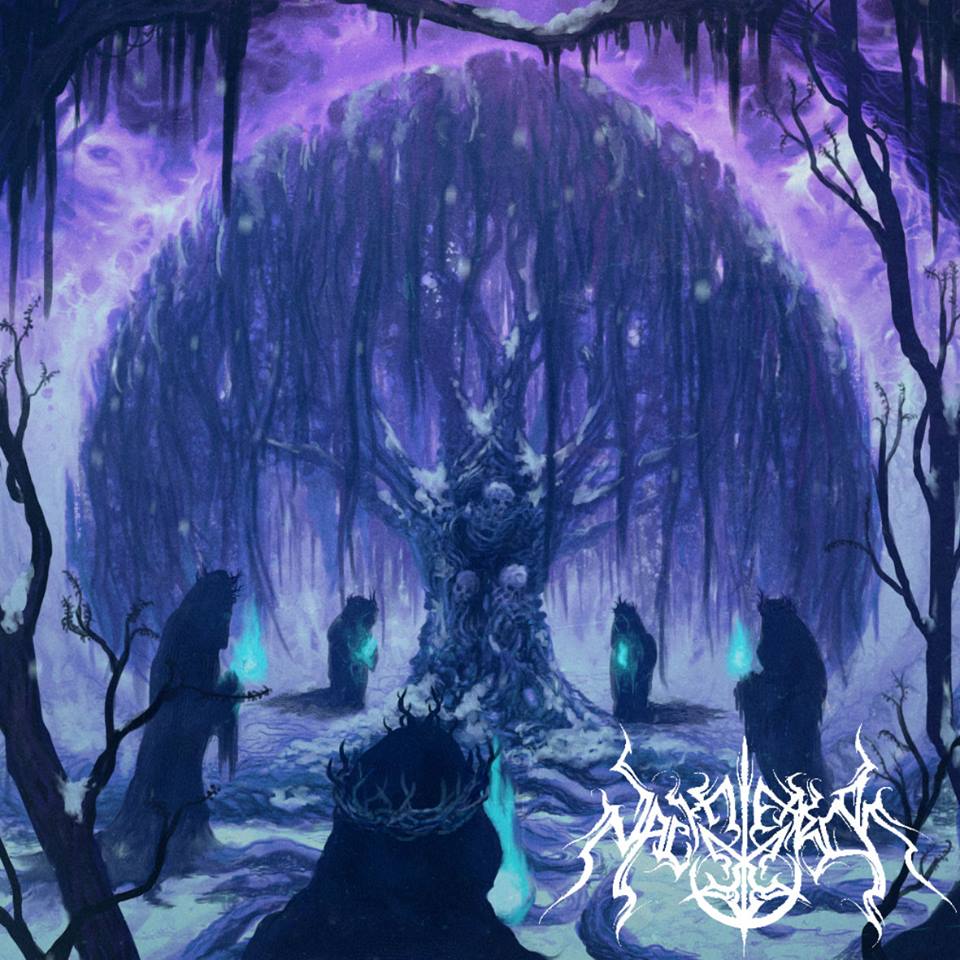 This split showcases two Canadian bands, both have certain similarities and are particularly bonded in blood by the talents of guitarist Saint Wikk aka Erik Laboissiere who is guitarist and backing vocalist in both. There are plenty of differences between the two Saskatchewan groups to make them more than interesting in their own right too. This is firstly being released on a split 10” limited to 300 editions in order to help fund both bands on tour and sell a few copies internationally via the label. I was told that production costs were $11 instead of the $3 that a CD costs which goes to show just what a vast difference in price it is to bring something out on vinyl. Fear not if you are wanting to hear this at a more easily accessible cost as it is available via digital download too and you get extra tracks this way too, so win all round.

I was pretty much drawn into this on the very first listen and knew that both bands were great new discoveries as far as I was concerned. First up is Nachtterror [7.5] who are described as Blackened Doom but go on to unveil quite a bit more. They have been around since 2006 and have two prior EP’s to their name. ‘The Breath Of The World Ablaze’ has angry bellows drawing you in and then sets about bludgeoning with some vicious blackened death, battery from the drummer being particularly fierce. Brooding in the background and suddenly flourishing are some strong symphonic elements and things lighten with clean vocals declaring “there’s something beautiful in the dark.” There is indeed and the change of styles though unexpected works really well, I guess out of any band I could put my finger on here it would be Moonspell that comes to mind first and this is every bit as rich, dark and decedent as the Portuguese group as well as ferocious and burgeoning the symphonic elements being akin to modern Rotting Christ, Septicflesh. ‘Upon Ashen Shores’ brings gloomy atmosphere and prepares to sprawl out with some excellent fragrant clean vocals that are enough to make you melt. Although dispensing with brutality here to a large extent, its hypnotic in the extreme drawing you in like a moth to a flame and with rougher growling vocals leaving you suitably singed. The download gives you no less than 2 bonus tracks as far as this band are concerned ‘Fall Of The Sabbath’ a fast galloping keyboard driven black gothic romp that would give Cradle Of Filth a serious run for their money and ‘Belial’ a passionate slow burning symphonic mass with some serious chops about it and plenty of labyrinthine twists and turns. Although Nachtterror sound far removed from their homeland Altars Of Grief [8.5] have it very much at their heart on this the follow up release to 2014 self-released album ‘This Shameful Burden.’ Starting with acoustic guitar work ‘In Dying Light’ adds heft to its then mightier atmospheric doom backbone with some up front rasping vocals. After more than getting my attention in this way it is when the clean vocals come in that things really make their mark. Basically it could be that we are listening to the ghost of David Gold here and they really send one hell of a shiver down the spine. I think it is fair to say that fans of the late great Woods Of Ypres are absolutely going to love this and its damn impossible not to, this is evocative and heady stuff and those vocals absolutely nail it. Put them together with the sort of musical prowess that bands such as Daylight Dies and Novembers doom excel at and it’s obvious we have a really great band in the making here. With choral parts heralding in ‘Your Heaven’ a fist is slammed down with some weight behind the crashing drums and the two vocals styles joust fantastically one going down and scorching the ground with flames and the other soaring straight to the skies. The overall effect is completely powerful and dramatic and then everything thunders into a massive black swagger which is impossible not to head bang along to. This lot pretty much have it all and really keep you on your toes as they shape-shift between moods and emotions of darkness and light. I felt like I could listen to this lot happily in my misery all day and was more than up for the one bonus track ‘Room Of Angel, a harmonious slice of suffering that’s pretty much good enough to take to the grave with you.

Although both bands here were very good Altars Of Grief took things to the next level and if they continue down the path they are on there’s no reason they can’t get the same sort of acclaimed attention that Woods Of Ypres eventually achieved. Check both bands out at the bandcamp link and see for yourself.