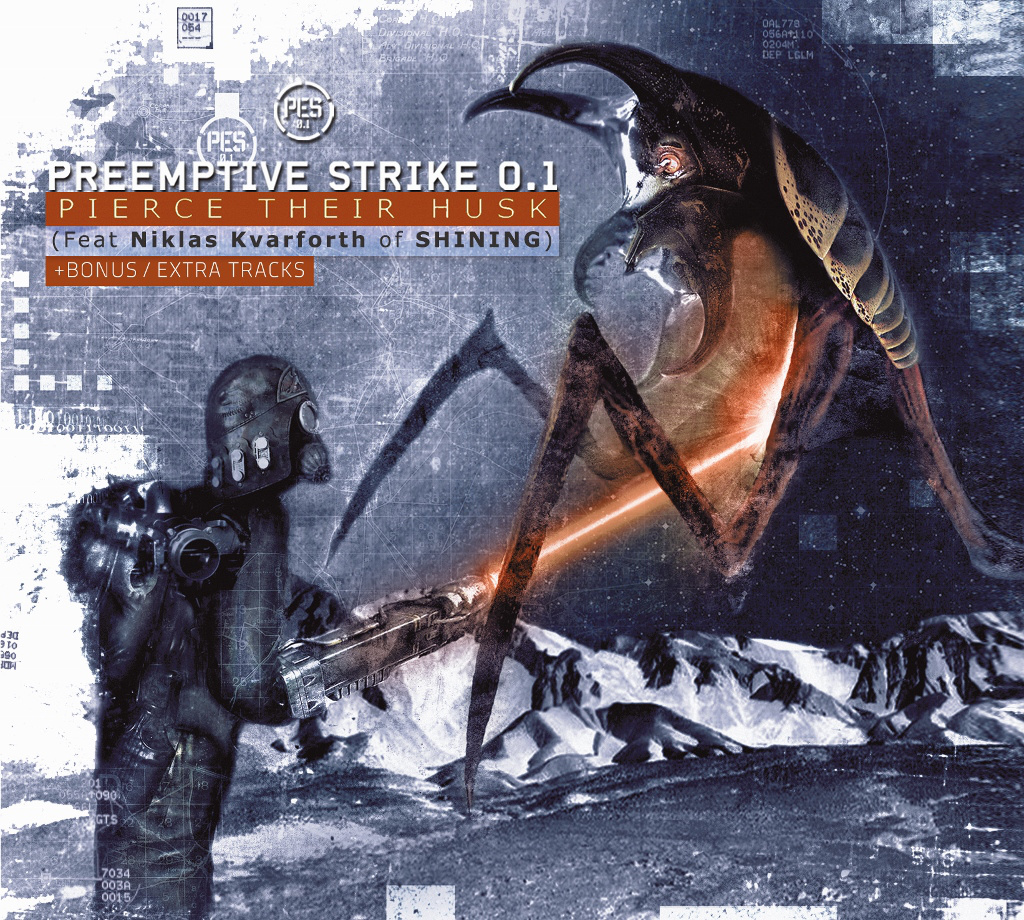 Warning, rampaging insects invading the cyber industrial zone! It would appear that PreEmptive Strike 0.1 have a bit of an infatuation with the Robert Heinlein penned classic Starship Troopers. It could be this or any other 50s B Movie feature involving massive bugs intent on destroying mankind but things always seem to lead back to Paul Verhoeven’s gung-ho and highly enjoyable film and this lot are probably not the only group to take it on board and base their music around the theme. PreEmptive Strike 0.1 are a duo hailing from Crete and are probably somewhat concerned that their island will be completely wiped out by a giant meteorite sent from bug central. Jim The Blaster and Cryon have as a weapon gone down an industrial route to repel things on their side via a couple of albums so far, which on the strength of this new material are no doubt great fun. This is the first time I have come across their music so far with this EP released by Sonic Hell Records which is a division of Polish black metal label Odium Records.

As is generally the way things are done with this genre of music you get the tracks themselves along with various remixes here. One way this works well is by the time you have given it a few plays the songs are well and truly lodged in your head like a parasite worm and prove rather difficult buggers to get out of there. ‘Pierce Their Husk’ is the first of these and futuristic keyboards and alien sounding spoken voices atmospherically bring an eerie sense of doom to things before a death grunt and cyber, dark wave beats have the song bouncing off faster than you can say “what’s this it’s got a good beat?” it’s a bit Kovenant, Front 242, Ensoph to name just a few and full of melody and including some good roared out vocal parts. Speaking of which whereas many would get a weapon like a huge canister of insecticide this lot have gone and had everyone’s favourite misanthropist Niklas Kvarforth of Shining here to add some vocal lines here. You should easily be able to pick him out and this is a good track which gets an extra point for having a synth line that really does sound like an evil ice cream van on it. This is also highly noticeable in the slightly more pumped up Skiltron NV 101 Remix of the track which also has a great swaggering part that almost sounds like it is going to go into Glen Miller’s ‘In The Mood’ putting a 40’s big band bit into the song.

Interstellar Threat is next and this actually gets in three versions on the disc and features V28 (and nope I don’t know who they are either). The industrial metal version is first up and does what it describes with bleeps and blips and a real EBM beat springing around on it. It’s all very much at the point of attack and the vocals are snarling, robotic and very alien on it and there are some good underlying electric guitar riffs coursing through things. It’s a right club stomper and I can see it going down a storm at the local goth club and getting people out of their dark corners and onto the dance floor. Personally though I think the Nyne Remix is the better version as a huge emphasis is put on the drumming and they blast away making the track absolutely battering. Also included here are The New Era Of Immortality which sees the band going head to head with Lyfthrasyr and forging a militant metallic industrial stomping track that has you looking for bugs and wanting to head butt them into a messy lump of green goo. Then there’s ‘Insects Intrude / The War Against The Bugs’ (Vigilante Remix with a maudlin piano part and a feel that reminds of electro pioneer Gary Numan at his most ‘Jagged.’

So an enjoyable disc all round, I love the concept and the music is pretty damn funky too, bugs be scared the humans are in control for now and as they yell out “we will win the war” you better believe it. Bugs ugh they creep me the hell out!