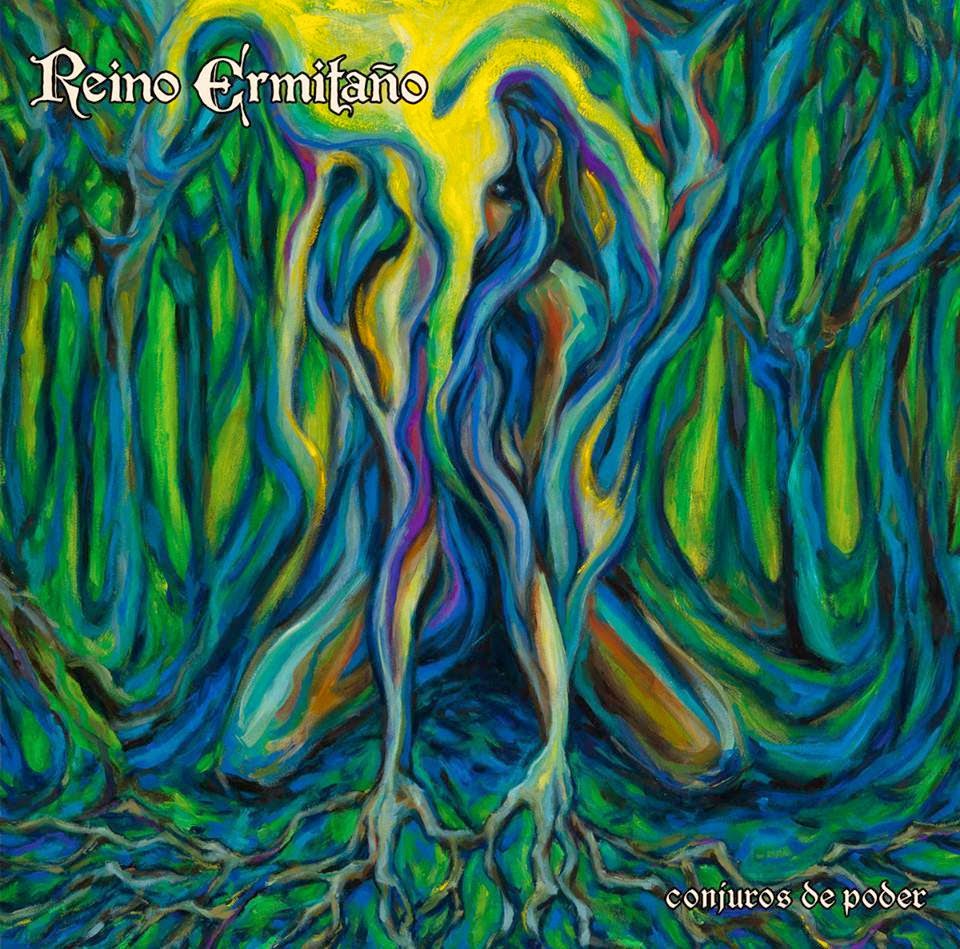 You wait years for a Peruvian doom album and then two turn up in the space of weeks. To be fair there can’t be too many bands playing this sort of style in the country but then again what do I know as some quick revision on the subject proves that there are somewhere in the region of 30 bands in the country playing variants of the style. It’s probably best not to dwell too much on the last lot through our doors El Hijo de la Aurora as they got somewhat slaughtered though. Reino Ermitano however are a band that I remembered from having reviewed their third album ‘Rituales interiores’ way back in 2008 via I Hate Records. I must have missed their 2012 follow up ‘Veneración del fuego’ so it’s big seven years since I last heard anything by them. One thing that quickly becomes apparent is that things have not changed that much in the intervening years, hell though this is doom it’s not about reinventing the wheel or anything and the band don’t look like they have had much in the way of line-up changes in the intervening years.

The band whose name apparently translates to Hermit Kingdom (approximately) do everything in their native tongue which Google is telling me is Galician This CD did however come complete with a print out of translations of all the lyric which is useful as the band have quite a mystical and magical take on things that is worth exploring. Musically though ‘Conjurings Of Power’ is a bit easier to dissect. Heavy slow bass trembling sound is quick to embed itself on you with opening track Calendula but attention quickly moves onto the witchy sonorous tones of singer Tania Duarte. To say she weaves a spell around things would not be a cliché as she really does and it sounds like magick is coming from her siren-esque delivery which completely captivates. I am going to get this out the way straight off but and even though she is singing in a different language she really reminds me of Italian songstress Cadaveria which is no bad thing at all. The band may not be a household name but as they up the ante and the doom flares shake and quake a bit more the music and lyrical and vocal combination may well remind a bit of the occult rock tones of bands such as Jex Thoth. Perhaps earlier they were ahead of their time (albeit in a retro revival sort of way) now might be the perfect time for them to get further attention. As the album continues it’s obvious they deserve it too. Their doom is played with panache and in a timeless sounding fashion that works so well and on songs like ‘Ancestral’ the vocals just roll off the tongue so naturally it’s obvious that singing in English would have been a completely wrong choice for the band to have made. It’s not just them either as guitar solos weave around just as dextrously and build up to some scorching wah wah licks on ‘Abraxas’, drawing you into the depths of the tracks even more.

There’s a few things that crop up sounding familiar within it all from time to time a bass riff on ‘Estigma de Cain’ is a bit reminiscent of Warriors On The Edge Of Time era Hawkwind and really lifts the song for me having me head banging and air guitaring away. Kali’ adds a splash of sitar on before getting into a Sabbathian stomp with the vocals cleanly wafting over the top like a billowing cloud of incense. ‘Chancapiedra’ nabs some riffs that will have every doom head chuckling away at the brazen cheek and as for ‘En mi Mente’ well for some reason the words Hare Krishna come into my head every time I play it and would fit in just fine there. Blood Ceremony fans take note there’s some flute in this one too

Spellbinding and very bewitching I am more than happy to welcome Reino Ermitano back and will be digging out their other album and giving it a few spins too. It should also be mentioned that the cover art painted by bassist Marcos Coifman is excellent and compliments the music brilliantly too.