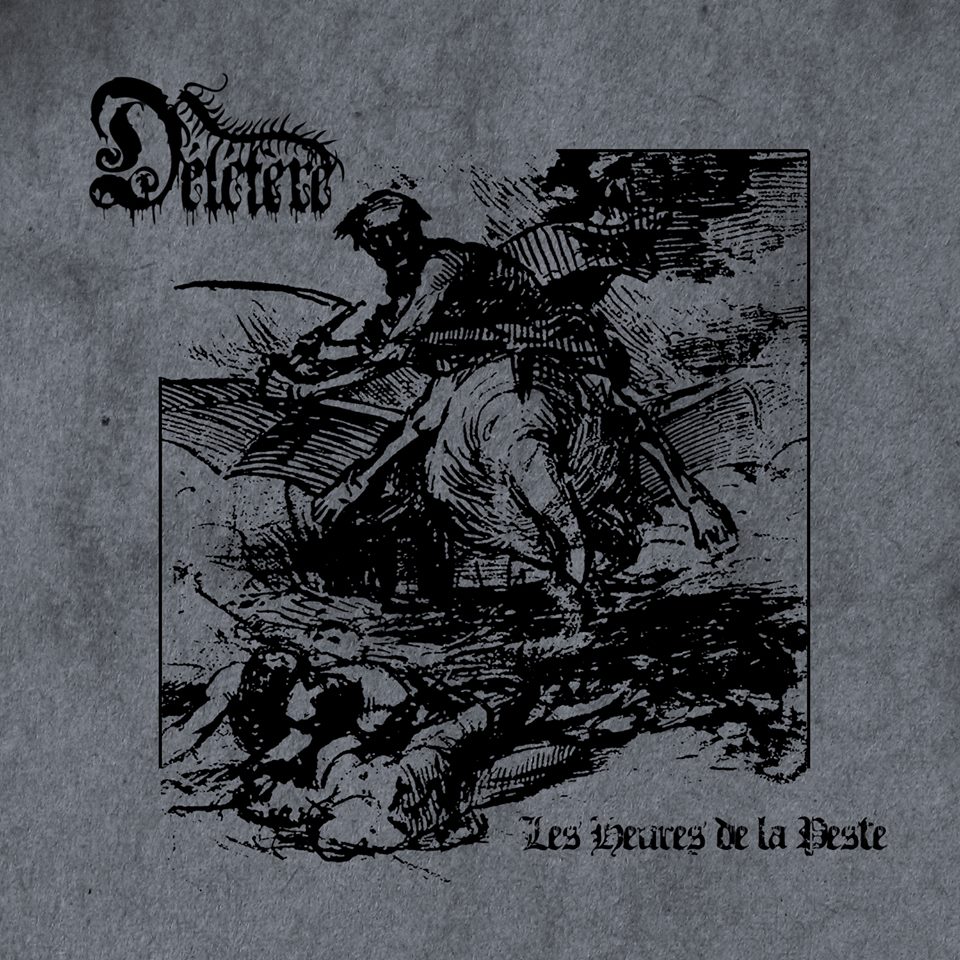 For over fifteen years, quietly and confidently, Sepulchral Productions has been flying the flag for Canadian home-grown black metal, seeking out some of the country’s most intriguing, obscure artists and presenting them to the world stage. Having released albums by such highly regarded artists as Gris, Fortresse and Sombre Forets, Sepulchral’s dedication to unearthing the best that the Canadian scene has to offer is commendable indeed. The latest addition to their quality roster is the Quebecian two-piece Deletere who after a couple of sturdy demos are now releasing their debut full-length ‘Les Heures de la Peste’ (or ‘The Hours of the Plague’ if you hadn’t guessed).

It’s a confident, vigorous album, buoyed by a sense of confidence that surely stems from the experience of its members (guitarist/bassist Atheos also provides guitars for Monarque whilst vocalist/drummer Thorlief has served time in Aurore and Valknacht). Melodic and frantic black metal is the order of the day here, high-pitched vocal shrieks leading the charge over buzzsaw riffs shot through with the sort of melancholic melody that is so prevalent in the Finnish scene. ‘Les Heures de la Peste’ walks the fine balance between rawness and polish, underground ferocity and reflective melancholy.

The triumphant riff-writing of ‘Strength and Honour’-era Satanic Warmaster is palpable on this record (particularly on the breathless ‘Laudes – Credo II’ and the more lo-fi ‘None – Le lait de l’essaim). There’s more than a whiff of early Deathspell Omega here too, with Thorlief’s cavernous screams being a dead ringer for DsO’s original vocalist Shaxzul on more than one occasion.

Deletere have a little more up their sleeve than just pure mid-90s monochromatic second wave worship up their sleeve however. There’s a little more subtlety to their approach – be it the intriguing keys that dance across ‘Matines – Portepeste’ or the chug-and-thrust of ‘Tierce – Aux thaumaturges egares une etoil’, an epic piece that unfurls wonderfully across the song’s seven minute length.

There are even some moments of inspired choral clean vocals – indeed, the strident and sonorous choirs that decorate the closing moments of ‘Sexte – Une charogne couronnee de fumier’ are excellent, at once atmospheric, dramatic and totally in keeping with the album’s crepuscular, medieval aesthetics.

By taking a relatively straightforward ‘underground melod-o-black’ approach and melding it with their own atmospheric slant, Deletere have striven to create something pretty unique with this record. Yes, there is the odd occasion where the riffing slips into a slightly too formulaic groove for comfort but the same could be said for half of the output of Finland’s black metal scene at times. ‘Les Heures de la Peste’ is another healthy addition to Sepulchral’s roster and further underlines the current rude health of the Canadian scene.