Wende – The Third and the Noble (Moribund) 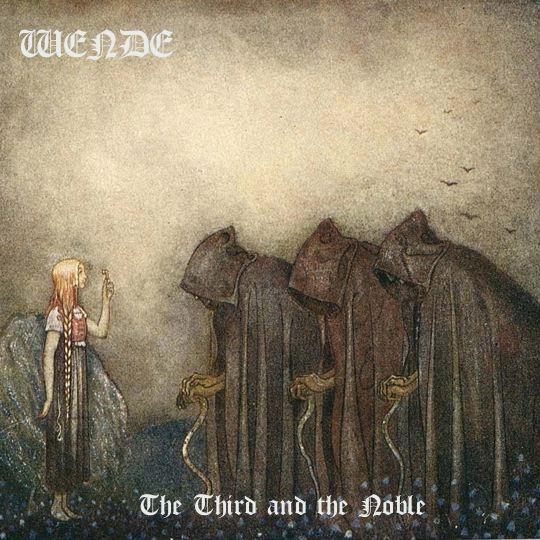 Released independently in 2012, ‘The Third and the Noble’ is actually a re-recording of Wende’s first demo (which precedes the album ‘Vorspiel Einer Philosophie Der Zukunft’). Here, it gets its first official outing via Moribund records. It is the lone and misanthropic vision of Zamiel, who when not involved in the band ‘Skinwalker’ has envisioned a 4 album concept encompassing; loss, reflection, change, and creation. (In fact, a literal translation of ‘Wende’ is “turning point). So if you want a long soak in the ice-cold waters of second wave, Burzum-esque, atmospheric black metal, then look no further.

‘The Third and the Noble’ may comprise of 8 original tracks and one cover, but it also works as a singular, massive expanse of music, despite the gaps between the tracks. Vocals are rasped and often narrated, while guitar lines shimmer and sparkle as they ebb and flow through fuzzy NWOBHM-style riffing. Bass-breaks appear and disappear, and tracks such as ‘Jarl’s Kin’ and ‘Journey of the Unseen
Wrath’ present us with the slight haunt of keyboards. The pace is largely mid-tempo, but Wende is not averse to picking things up with some glorious riffs and punky attitude, and on ‘Nothingness’ a good ol’ Tom G. Warrior grunt makes a welcome release from the world-weary melancholy. The forthright and strident ‘Beyond the Moon and Beneath the Stars’ is a definite highlight of the album, with its more open structure taking us to the skewered time-signature and sombre narration of ‘Everything Ends’ and then ultimately, ‘Towards Ragnarok’.

This is good stuff, bristling with ideas, desolation and mysticism. Songs are allowed to wander and meander in their own time, without the crowd-pleasing battery that seems to plague most contemporary black metal releases. The cover (a painting taken from Swedish artist John Bauer) is knock-out too, and maybe Moribund should look towards securing a vinyl release for the album also.