UFO – A Conspiracy Of Stars (SPV) 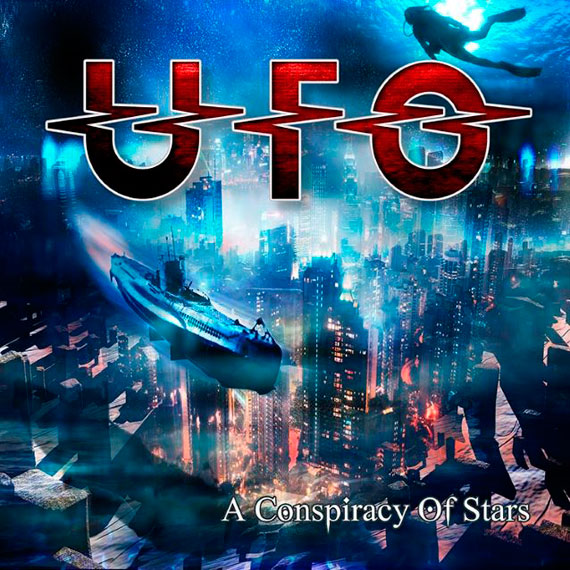 Twenty Two Studio Albums! Can you imagine being in a band that has done 22 studio albums? And that doesn’t include all the live albums, side-projects and solo releases. Now OK, from the original line-up, only singer Phil Mogg and drummer Andy Parker (sometimes people used to mishear my name when I was a drummer in Metal bands and occasionally after a higher profile gig I’d have a drink thrust into my hand before I’d got chance to explain I wasn’t, actually, that guy from UFO…sometimes it took me until I’d quickly finished the whole drink to explain…) are also on this one, but they are still ably accompanied by very-long-term cohort Paul Raymond. Plus, guitarist Vinnie Moore has been with them over 10 years now – Rob De Luca completes the current line-up on bass.

What always hits you first about a new UFO album is that somehow once you hear Phil Mogg’s voice, it could only be UFO. Such a distinctive tone and delivery, so utterly British, yet at the same time universal. But the thing that particularly hit me about “A Conspiracy Of Stars” is that even if you removed Mogg’s voice, it still sounds very much like classic UFO. Vinnie Moore, a guitarist with a varied and impressive pedigree of his own, has taken to his role fabulously – a real guitar-god, just what UFO after the Millennium needed. Take ‘Devils In The Detail’, a track that takes you right back to the band’s 70’s heyday with that UFO groove and emphatically littered with stunning lead-guitar. Then of course you add back in that trade-mark Mogg vocal and lyric and you have UFO at their finest, totally relevant in 2015 as well as faithful to their own past (something I’ll return to in a moment). As you would expect and hope, there’s plenty of excellent lead-work scattered throughout the album, but it’s not something the band rely on, the songs have to make an impact on their own merit, and many of them do. Much of this album can be chalked up to “Classic UFO”, which would be more than acceptable, but there are unexpected gems lurking too, like the Southern Metal flavoured ‘Ballad Of The Left-hand Gun’. At first it could be anything from Molly Hatchet to Chickenfoot – then as it progresses you realise it could also be Crobot or Vintage Caravan on their retro kick from last year. Eventually UFO’s inimitable groove utterly claims it as their own, but it’s made you see that here is a band who have been around for years, somehow being current AND retro, faithful to themselves, yet also original – a true highlight!

I’m informed that Vinnie Moore has had a big hand in writing most of the music on “A Conspiracy Of Stars”, with De Luca penning a couple and Paul Raymond getting involved too. The songs on offer are varied, whilst always retaining that UFO identity – sometimes crafting themselves around a monster classic rock riff like on ‘Real Deal’, or grooving around a Hammond infused stroll like ‘Rolling Rolling’, this is an album full of tracks their fans would love at any point in their 45 year career. Though maybe not fans of their space-rock debut – however, that tenuous link allows me to relay the fact that production legend Chris Tsangarides (who does a fabulous job on this album) was a 14 year old trainee at the studio when UFO were recording that very debut. The far-reaching arm of UFO eh? Is there a dedicated Hard Rock/Metal fan in the world from the last 40 years who hasn’t heard something by UFO? And yet the band refuse to just keep peddling their bulging back catalogue. Hell, why should they when they have songs like this to offer in 2015! Loyal fans and recent converts alike will love this album, and long may it continue!