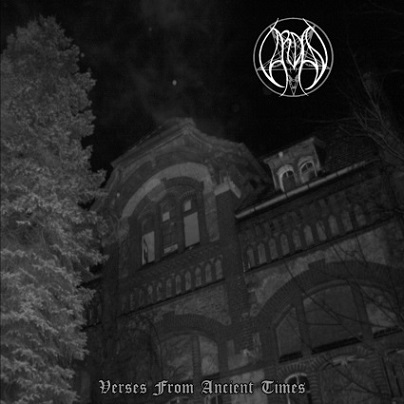 It’s really no surprise at all that one man machine Vardan is quick off the mark to release an album in January this year. After all the Sicilian threw out no less than three of them along with a split with Burial Mist in 2014. There’s no denying that he is creative and prolific at all and this in fact is his ninth album and I strongly suspect it will not be the last we hear from him before this year is out.

Whereas last album ‘Enjoy Of Deep Sadness’ focussed on three epic depressive dirges which clearly had suicidal notions at their heart it’s quickly evident that the four tracks here (entitled simply I-IV) are a fair bit less gloomy and introspective. Indeed rather than being full of the stench of death there is quite a bit more life in things this time around. Perhaps summer had died and winter had cast its cold touch over things as Vardan went no doubt to record this album in one quick session, leaving him feeling somewhat happy! Nope let’s not kid ourselves there is plenty of hate and misanthropy to be dealt out here and as thorny guitars, battering drums and a wretched elongated gurgle from the vocals quickly get their talons in, track I cracks off and flurries away at a fair old pace. There’s an underlying filthy sounding layer of grave dirt under it all and it’s pretty primitive stuff as it rigidly takes on a melodic weave and enforces itself throughout the first part of this 11 minute sermon. It makes you wonder how he keeps the throat raping shrieks up throughout the duration as they are really full bodied and invasive. A sudden drop out allows guitars to clamour away before the track slowly oozes back in adding a touch of diseased doom to the proceedings and making you feel like something has crawled out of its grave. Some reverb is added to the vocals which give them a more ghostly feel and a feral one adding further dimensions to things. Melody is quick to the fore on II, it’s slightly pompous but is not projected in your face making it more subtle and austere. It has more of a sombre and depressive feel to it but again those rabid shrieks take centre stage as they angrily screech and scratch away. You could easily imagine the main melody here being played on a massive church organ, perhaps inside the church on the cover as the dead rise from their tombs summoned by its call. It all canters off nicely and really gets its rotten groove in as things progress too.

III sees Vardan attempting something quite short for him with an eerie echoing keyboard tone lurking in the background and a clattering, sharp snare, booming drum up front and some powerful fast parts that sound like they have come from very dark medieval times. It’s pretty evident the Italian has no shortage of ideas in what he has done here and in his prolific past, it’s also clear that his form of black metal especially here pays reverence to the older Scandinavian clans. Despite the amount of albums to digest I have not found his work to have got stale or boring in the slightest and reckon there is plenty more to come. As far as his last assault here is concerned it’s another lengthy one and starts off with a slightly jaunty and mischievous sounding funeral dirge melody and those necromantic shrieks before blasting into a fast whiplashing race like the hounds of hell are on its tail. Spreading its disease through various speeds and emotions again this has no trouble captivating through to the end.