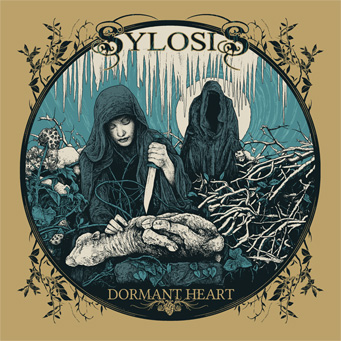 My first encounter with Sylosis was when I reviewed their 2006 EP ‘Casting Shadows’, but must admit that I don’t recall seeing much of them in the 9 years since, even though they have released 4 full length albums in that time. Only guitarist/vocalist Josh Middleton and bassist Carl Parnell are still with the band, with Alex Bailey joining in 2008 on guitar and Ali Richardson only joining the band after recently departed original drummer Rob Callard had already recorded the material for this album.

The steadily increasing heaviness of the guitars plateau at a melodic level on “Where The Wolves Come To Die”, while the vocals are far more abrasive forcing the guitars to up their game during the discordant lead. But for “Victims and Pawns” the guitars have no such worries as they peel back layers of flesh keeping pace with the snappy drumming and aggressively shouted vocals.

Title track “Dormant Heart” has an incredibly gentle lead overtaken by galloping guitars, then drums and finally Josh’s roaring vocals before it gets a chance to fight back and weave its way through the remainder of the song.

After the intricate guitar twiddling for the intro morphs into the main “To Build A Tomb” riff and the vocals kick in, the tempo increases dramatically until it becomes truly manic for the lead break.

“Overthrown” is littered with short sharp riffs and coupled with the harmonic as an accent their power is only matched by the heavy vocals as Josh roars angrily down the mic before the quick lead plays out the song. Whilst the lead on “Leech” is far slower than the riffs it is played over as it gently draws blood with its emotive transitions.

The riff on “Servitude” is a far more straight forward chunky affair as it’s accompanied by the steady cymbal tapping that livens up to a sound drum battery as the guitars work themselves into a frenzy for the lead solo.

After the first 45 seconds of increasing hum “Indoctrinated” become a rather high energy affair with its finger blistering riffs, stop and blast drumming patterns and hardcore style vocal rasping.

What starts out sounding like it shall be a sweet ballad quickly becomes a far heavier song, but the chorus on “Harm” returns to that opening melody with its dreamlike quality to keep the song interesting, eerily so.

The drum and guitar triplets gallop along steadily on “Mercy” which also happens to have pretty much the only clean vocals on its chorus.

The penultimate song “Callous Souls” alternated between fast and really fast, while the vocals range from heavy to rather more screechy, ala Phil Anselmo, as the emotions boil over.

Wrapping up the aggression of the album with the rather mellow “Quiescent” is a nice touch, as it drives home that a song doesn’t have to be fast and heavy to have plenty of weight behind it. Additionally the meandering lead is pleasantly hypnotic enough to have you lose the last five minutes of the song as the piano takes over.

A thoroughly enjoyable start to the year for me on the reviewing front. Let’s hope it stays this way.