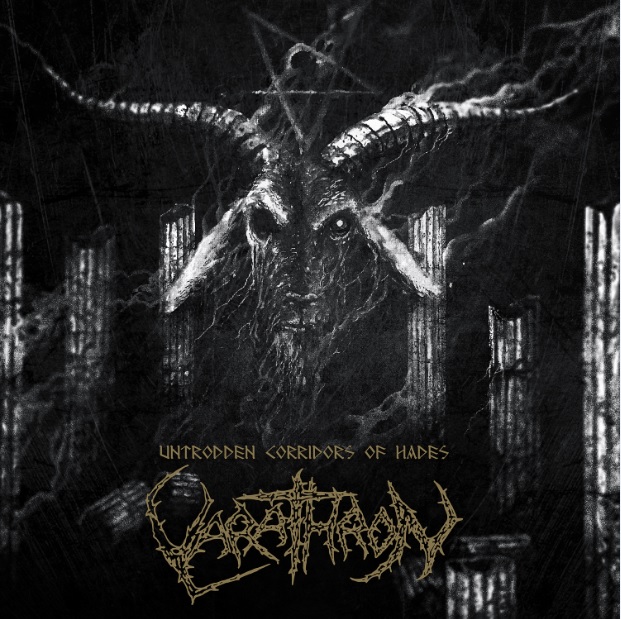 Greek black metal has built a universe all of its own over the past two decades and Varathron has provided several of the grandest pillars to that cosmos. Stefan ‘Necroabyssious’ and crew have been bolstering the sheer depth of quality with early contributions such as His Majesty At The Swamp as well as the more recent Stygian Forces Of Scorn. And if you want esoteric black metal, ignore the critics and look no further than 2004’s splendid Crowsreign. So now Varathron have come forth once again to try to find a new peak in the great Greek cycle with this latest effort Untrodden Corridors Of Hades. Let me just say from the outset that this is a huge, thundering slab of an album. With blinding highs and pitch-black lows, this has to be heard in its entirely to be truly appreciated. Like some grand invocation, a crushing black mass that will undoubtedly have any Rotting Christ fans out there thinking of the band’s more recent output. I’m not going to debate here who did what first but let’s just say that Untrodden Corridors feels as fresh and vibrant as anything I’ve heard this year even if we could spend the rest of the day debating its influences. But while the two band’s are undoubtedly from the same branch of the very same filthy tree, Untrodden Corridors is more visceral to Kata Ton Daimona Eaytoy (2013) and Aealo’s (2010) clinically executed rush of Benedictine insanity. This is no shadowy emulation – Untrodden Corridors of Hades is like a curse to the heavens hurled up from the pit of the gut. It also has plenty in common with the Christ Agony end of the death metal spectrum – slower, darkly calculating, atmospheric and infused with a measured respect for melody.

Untrodden Corridors of Hades side-lines the wall-to-wall blast beats of the average black metal band in favour of more tribal drumming arrangements but then still unpacks some hair-drying crescendos when the need arises. But it also veers from the unashamedly bombastic to the gritty and sublime without a second thought. A little too casually, I thought at first. The album slips from chest beating Eastern melody and choral chants and descends into darker corners of spiritual exploration. After the first couple of tracks, Varathron heads abruptly off-piste with the sombre lament of Arcane Conjuring and then Leprocious Lord which almost felt a little too rapid a fall from the grand opening. But Necroabyssious’s snarling narration and sombre atmosphere soon take up the slack where the two cracking openers left off. What this is all about is updating all that has gone before and placing all the dynamism and mastery of Varathron’s evolving black metal meets melodic death metal sound, including a few nice and subtle progressive elements, into a refined production that lays everything bare. The full force of every tumultuous detonation, every murmur, crows call and bass line can be felt resonating. Things get more interesting as the album continues and tracks like The Bright Trapezium and Delve Into The Past, which initially stumped me – each flanking, and slightly overshadowed at first, by the superb Death Chant as they are. But they slowly bound me in the same spell as other tracks and more than won me over (how can you argue with the genius of a track called The Bright Trapezium anyway?) Of course Death Chant is a monster of a track. It pretty much instantly became one of my favourite tracks of the year with a tremendous dropping chord progression that could have been the soundtrack to the arrival of Set himself. The adventurous march of this album will be irresistible to the average Hellenic black metal fan and anyone who likes any of the bands mentioned and loads more such as Zemial and Melechesh.

If Stygian Forces was Varathron’s Theogonia (probably my favourite album of all time) then this is the same leap forward for the band as Rotting Christ’s follow up Aeolo was for them – perhaps even better executed in its own way. A fantastic evolution for the band and one that I’m sure will provide them with the elevation in recognition that they deserve.