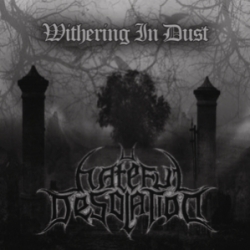 This demo sees a meeting of minds from Italy and Egypt with Gray Ravenmoon providing the hateful vocal parts from the former and Void the desolate instrumental sections from the latter. Although only essentially two tracks there’s quite a lot of substance on this debut collaboration to give you a good idea of what to expect if they expand upon things in the future.

The nine minute ‘Your Memory Will Never Fade’ slowly ebbs in with mournful guitar work and a hideous blackened rasp lingering out of the depths. Its quick to drench in a depressive funeral shroud and melody is rich and deep as its wreath like fronds spread sounding as though it is oozing out of a fog enshrouded tomb. Atmosphere is incredibly strong and this invokes exactly the sort of dreamy, death like thoughts one would hope this sort of music to exude. Keyboards are eerie and not overpowering, the drum machine keeps the time well and bass is nice and thick in the mix. Vocals are also just at the right level and cadaverously wretched with some good misanthropic retches to expand upon more dramatic moments. A spoken word part in the mid-section with more of an acoustic backing works well allowing things to breathe and also entrancing the listener in the process as a harmonious guitar solo unravels.

There’s barely a pause before a more burgeoning and ferocious pace heralds in second number ‘Withering Away in Solitude.’ The urgency is tempered by more bloodthirsty vocal parts as it goes into a mid-paced section with them literally shrieking away. The depressive feel is still very much there but it feels more like the protagonist has fully woken from slumber and is stalking the unwary to prey on their blood. It’s pretty potent and it’s obvious that despite distance separating the duo at work here they are certainly working from the same page and have co-ordinated their parts together admirably. Backing these two tracks up is an instrumental of the first number which really allows you to get beneath the mournful tones all the more. It’s such a strong song that it only takes the one listen to the full song before hearing this and welcoming it back like a long departed friend. A very good introduction here and one that I hope will develop to bear more rotten fruit in the future.