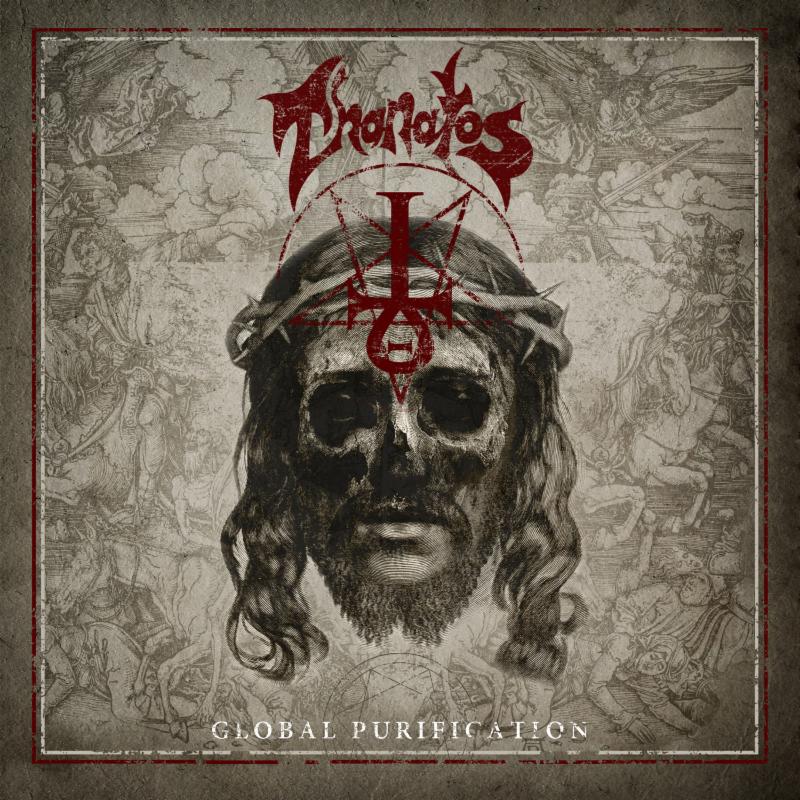 Thanatos are a proper death metal band. How proper? Well, they were arguably the FIRST extreme metal band from The Netherlands and since 1984 have been producing some of the most consistently brutal, thrashing, death metal albums that have come out of Europe. Criminally underrated and often overlooked, this band deserve your attention.

All their previous records, particularly the last two, 2004’s ‘Undead Unholy Divine’ & 2009’s ‘Justified Genocide’ have been killer and this, their sixth full length, is no exception.

Opening up with the massive one two punch of raging title track and hyper aggressive ‘The Murder Of Innocence’ it’s clear that now, thirty years on, the band have become even more pissed off and angry with all the bullshit society throws up.

It’s not all social commentary though…. ‘Queen Of Gore’ is a real 80’s throwback death metal song with a great opening lyric ‘you dug her up from the grave, to turn her into your bondage slave’ a real ‘Scream Bloody Gore’ / ‘Seven Churches’ style blaster.

There’s  variety though…. ‘The Demonized Minority’ starts off with a crushing yet melodic riff before exploding into a blasting Slayeresque ball of fury.

‘Feeding The War Machine’ is my favourite track and quite possibly one of the best metal songs I’ve heard this year – melodic, chugging riffs, memorable hooks but still hyper aggressive and in your face…..quality! Which pretty much sums up this album. All the band play with utter conviction and commitment, the mix by Dan Swano is spot on and the production by the band themselves sounds rich and organic.

This is not for casual metal fans…. this is vicious metal played by angry, pissed off blokes. Paul Baayens (Asphyx / Hail Of Bullets) and band founder Stephan Gebedi’s (also Hail Of Bullets) guitar work is some of the finest I’ve heard in the genre in ages. Memorable riffs, face carving solos and Stephan’s vocals are just dripping with bile and disdain, definitely his finest vocal performance thus far.

Buy this album…. you won’t be disappointed.