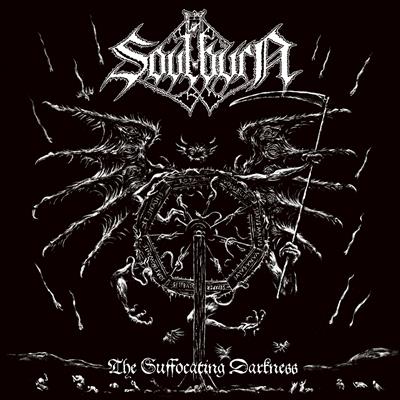 Soulburn is the band originally formed by Asphyx legends Eric Daniels and Bob Bagchus back in the ’90s. Rounded out with vocalist/bassist Wannes Gubbels their debut record, 1998’s ‘Feeding on Angels’, sounded so similar to Asphyx that the same line-up eventually decided to resurrect that band in 2000. Fast-forward to now, and since Bob Bagchus vacated his role in Asphyx, Soulburn has been able to rise from the ashes once again. With Daniels onboard, a second guitarist in the shape of fellow Grand Supreme Blood Court band mate Remco Kreft and new vocalist/bassist Twan van Geel, all signs point to another Asphyx/GSBC styled death-doom project. Actually, ‘The Suffocating Darkness’ defies any such expectation.

Cinematic intro ‘Apotheosis Infernali’ gets us underway with a combination of demonic breaths, female voices chanting all things “Sathanas” and imposing orchestral beats. Silly dialogue aside, it definitely ratchets up the sense of anticipation for what Soulburn mark II will deliver musically. When the goods do arrive, there’s immediately something different. From the initial scream and imperious riffs, an overtly black metal vibe emanates from the speakers. In fact it’s fair to say that the opening riffs recall Immortal, just to embody how surprising events are here. And as we delve further into ‘Under the Rise of a Red Moon’ (aside from a painfully slow descent into doom) the shrieked vocals, fixated drum patterns and acid riffs reek more of Bathory than they do of putrefaction. One of the few musical resemblances to Asphyx on the entire record is the savage outburst which occurs on ‘The Mirror Void’. Rather than Asphyx as we think of them today, the totally decayed, necro sound brings to mind ‘Last One on Earth’ – albeit briefly – before more sadistic riffs needle away and a discombobulated solo occurs.

As would have been expected considering the personnel involved, Soulburn is not in the business of reinventing the extreme metal wheel. Sure, ‘The Suffocating Darkness’ has really shifted the band’s gaze from death to black metal but its still completely rooted in old school arrangements and entrenched in the veteran mentality. As a rule, assaulting minds is more of a concern than stretching them with this effort. Shifting from guitar work which feels like an ambush of scorpion stingers to banging doom (‘Hymn of the Forsaken II’, which I think contains the same riff as the original) to utter morbidity (‘I Do Not Bleed from Your Crown of Thorns’), there’s a sense of malevolence dripping from almost every second. However, that’s not to say that there aren’t also a few subtle or more covertly subversive elements at work. In ‘Absinthesis’ we get submerged strumming and spiteful vocals like classic Norwegian black metal; during the previously mentioned ‘Hymn…’ sequel, comes a bit of vocal weirdness to rival Morbid-era Dead; and at one point there’s even room for obscure chanting amidst the doom and blackness.

Final track proper ‘Claws of Tribulation’ is one of the album’s high-points, perfectly encompassing the intent and expertise of Soulburn anno 2014. Hinged on a pure black metal strum, glimmers of light flicker in the oppressing darkness to hypnotise the listener either side of a beating. Overall, ‘The Suffocating Darkness’ does exactly what is suggested in the press release. While it doesn’t offer anything that we won’t have heard from any number of bands influenced by Bathory, and perhaps could have done with a track/outro less, it’s brilliant how the album avoids all comparison with ‘the other’ band. Some may begrudge Bagchus and Daniels for stepping away from death metal but the choice certainly validates their decision to resurrect Soulburn and, for my money, this is a superior record to ‘Feeding on Angels’.