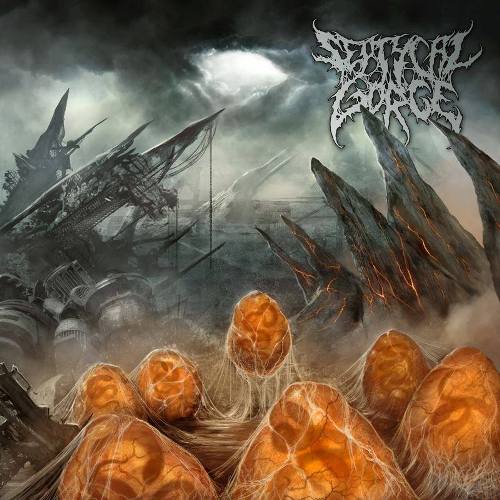 `Scourge of the Formless Breed’ is the third full length album by Turin’s underground brutalists Septycal Gorge, and it is a pretty interesting proposition. Many bands of this style opt for simplistic, gruesome, splatter-gore lyrics and put all of their creative ideas into the music; not so with this band. There are some very interesting, fairly deep and complex apocalyptic/science-fiction themed lyrics to be had here; some of which are inspired by the likes of eccentric visionary William Blake, Homer’s Odyssey and T.S. Elliott.

The music itself contains a lot of what you would expect; massive doses of skull-shattering hyperblast and incredibly technical, super-athletic single note riffs flying around all over the place. As I am sure this must have been mentioned on other reviews of this band’s work, but there is more than a hint of Deeds of Flesh here, the technical, intense relentless brutality is indeed similar. However, this band are no mindless copycats, and have some great musical ideas of their own. There is a little more emphasis on song writing here than on previous releases, and in my opinion, this band are at their most effective when they slow it down a little. They really do know how to write a proper Riff (with a capital R), when they aren’t leaping up and down the fretboard trying to be as brutal and technical as possible. Great examples of this are on songs such as `Deeds of Eternity’ which is just dark, crushing and entirely majestic, and `Urizen – The Burning Sun’ with its myriad twists and turns.

There is no doubt that this band are highly skilled, and can play their instruments with incredible technical ability and dexterity. As I mentioned there are some truly great, creative, dark and atmospheric moments, but the constant, technical blasting in between can often render this album rather samey, and if you don’t listen intently, this can easily wash over you after a while. Maybe it’s because I’m an old geezer, but there isn’t quite enough here to make it a memorable album for me, despite the moments of greatness on display.

I guess it’s not too surprising that there are lots of insane, frantic and complex blasting passages all over this album when you discover that the drummer is Davide Billia, also in lunatic speed merchants Antropofagus. Technically it is extremely impressive, but honestly, too much just tends to leave me cold.

This album is definitely for fans of out-and-out technical brutality. There are hints of something more, certainly something more musical, but not quite enough for this to stand out from the crowd.