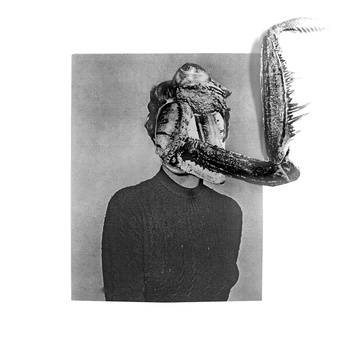 Originally self-released in 2012 ‘Mantiis’ is Obsidian Kingdom’s début. The original run of 500 copies sold out, so now Season of Mist is re-releasing it so more of us get to hear it before they release their second album which they are already working on. The single song that is divided into 14 tracks puts the Spanish quintet through a myriad of paces as it builds from acoustic to blast beats with a wide range of other genres in-between.

Opening track “Not Yet Five” very slowly has the single sustained keyboard note joined by a few others, then some ambient electronic sounds and finally acoustic guitars and drums once it becomes “Oncoming Dark” and harmonised clean vocals carry it along pleasantly. Towards the end of the track Ojete Mordaza II’s drumming kicks up a notch as his feet go overtime. Zer0 Æmeour Íggdrasil’s keyboards on “Through The Glass” are both an underlining presence as well as tinkering notes that are clearly audible through Rider G Omega and Prozoid Zeta JSI’s heavier guitars.

I’m uncertain who is doing the clean and death vocals between Zer0 and Rider G, but the first time the deeper growls are heard is on “Cinnamon Balls” which ends on a high pitched lead before fading out into brushed drum cymbals, piano and a lazy guitar on “The Nurse”.

“Answers Revealing” once more has the clean vocals sweetly sung above gentle drumming and picked guitars prior to the more black metal growls of “Last Of The Light” take over accompanied by frantic drumming and guitar work which fade into ambient sounds and a jazzy bluesy crescendo that ends back as black metal once more.

Piano, accompaniment guitars and a steady timing signature allow the soft vocals to shine as a focal point on “Genteel To Mention”, but once it becomes “Awake Until Dawn” the heavier guitars and raspy vocals are far more caustic to the ear unlike the outro with its whispered vocals.

“Haunts Of The Underworld” has a great feel to it reminiscent of eerie trepidation but trying to lull you into a false sense of security before blasting out the guitars with false harmonics, pounded drums and an intricate lead solo.

The throaty roars over the slow but heavy guitars on “Endless Wall” have an ominous quality to them that work perfectly for the tone of the track. “Fingers In Anguish” on the other hand has a windswept flavour to it with Fleast Race O’Uden’s bass notes cutting through with a deep hum which he turns into a heavy rumble on “Ball-Room” where we have death and clean vocals simultaneously for the first time.

The final track “And Then It Was” has it all. Mellow and fast guitars accompanied by the similar paced drumming and a wall of keyboard to fill out the sound completely when there are no vocals taking place.

An interesting experience that weaves its way from beginning to end without repeating itself or getting too drawn to  a single sound that lasts for longer than a minute or two.