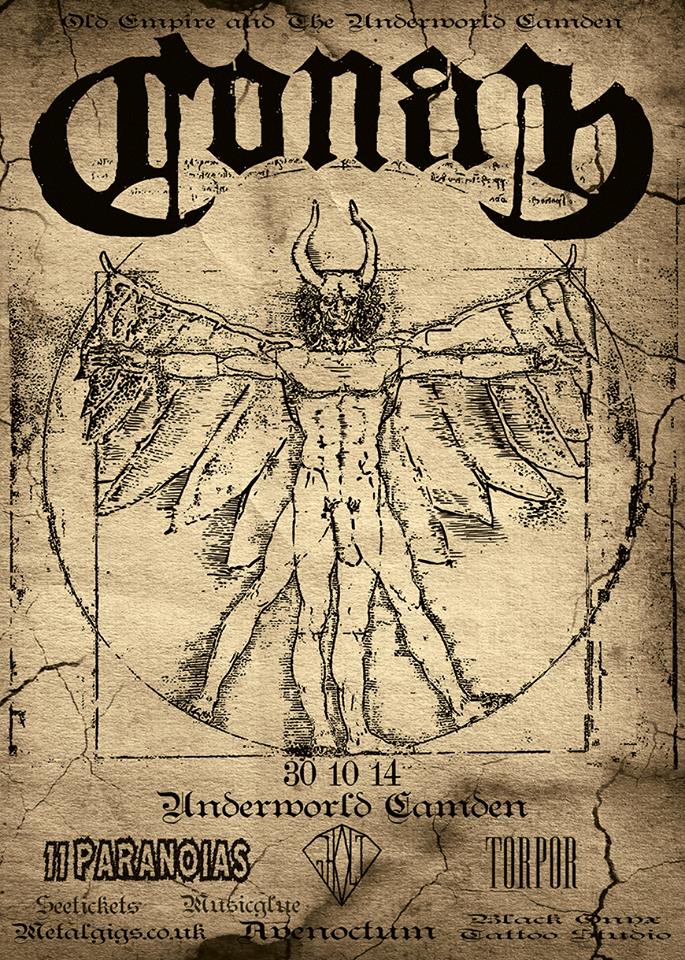 It’s an undisputed fact that Old Empire are currently unrivalled in their ability to put together killer line ups within London. Tonight is no exception, and sees four of the UK’s best home grown talents out to celebrate Devil’s Night with one of the loudest shows to batter ears in a long time.

First up are local four-piece, Torpor, who are a ferocious blend of sludge and hardcore. The energy and enthusiasm projected from these guys is palpable and they emit the fresh, youthful glow of a band still in their early days. Vocalist Nats Spada possesses a ferocious set of vocals, shifting between harsh throaty growls and a clean, punk style boom that smacks of attitude; her choral display is bolstered by some meaty bass playing and the whole performance provides a suitably heavy foreword for what’s to ensue.

Another London band, GHOLD, are up next; the duo appear to be the end result of what would happen if you let a pair of cavemen loose with a drum kit, guitar and microphones. Their sound is intensely rhythmic, while still retaining an angry sense of primitivism whose brute force is as heavy as it is brash and noisy. These guys are currently a favourite choice for support slots, having previously opened for the likes of Moss and Dragged into Sunlight, and it’s easy to see why with the raw display of talent currently emanating from the stage.

The evening is slowed down considerably with the appearance of 11Paranoias; made up of Ramesses and Bong members, it’s easy to imagine what to expect from these guys. There’s plenty of riff showboating, however, everything is played at a creeping, near glacial pace and all perception of time and focus simply melts away under the weight of the psychedelic fuzz of tracks from their debut album ‘Stealing Fire from Heaven’. A definite change of pace from the previous two acts, but certainly no less heavy or enjoyable.

Those that have previously seen Conan will know exactly how loud they are, but for those who have yet to witness how devastatingly and, as cliché as it is to say, crushingly loud and heavy these guys are than it’s a volume which is simply indescribable. Tonight sees the UK debut performance of drummer, Rich Lewis, recruited to the band recently following the departure of Paul O’Neil. For those that were previously unaware of the line-up change, it would be impossible to tell that anything is different as the performance is so water tight. Gut-wrenchingly loud and fierce sounding as ever, song highlights include the likes of ‘Hawk as Weapon’, ‘Crown of Talons’ and ‘Horns for Teeth’. A surprise appearance from Craig Bryant of Bast, to perform some guest vocals adds a little variety to the onslaught of weighty riffs and is a definite crowd pleaser. If tonight has proven anything, it’s that Conan are simply unstoppable and no matter what challenges are thrown their way, they’ll continue to decimate everything put in their path.