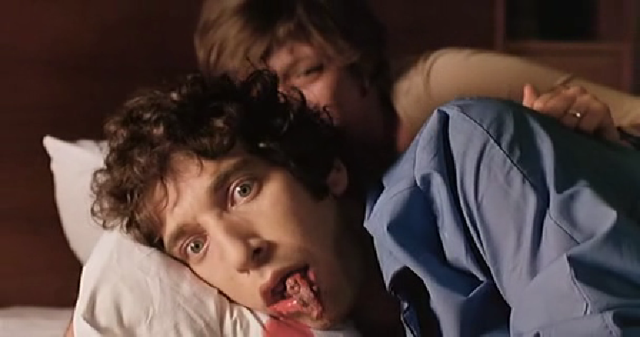 This is pretty much where it all started for me, Shivers was one of the very first extreme horror films I ever viewed and it’s got a lot to answer for. Firstly it set the path for a near obsession with director David Cronenberg that had me scuttling back in time to see his confusing and convoluted early body horror shorts Stereo (1969) and Crimes Of The Future (1970) as well as pretty much everything he has done to date, including drag strip drama Fast Company (1979). True I still have to see A Dangerous Mind (2011) and Maps To The Future (2014) and although I feel he has veered off from his earlier path somewhat he has never let me down. I’m also looking forward to getting hold of his first novel ‘Consumed’ and reading it. Even if he does ever decide to retire it would appear on the strength of Antiviral (2012) his son Brandon may well be a worthy successor to his crown. It was undoubtedly the terrifying triptych of Shivers (1975) Rabid (1977) and The Brood (1979) that introduced the Canadian auteur to horror fans though. Shivers did the job for me on first seeing it on an old Alpha Intervision video cassette. I have owned numerous versions of this film over the years and fondly remember getting all three of the above mentioned titles on video along with a free Shivers t-shirt which has long since fallen apart. Naturally I was very keen to view Arrow’s print as it had been restored for high definition and overseen by the director himself. Shivers also known as They Came From Within and The Parasite Murders takes part on an exclusive housing development Starliner Towers on a small island off mainland Canada. It’s a baby boomer, yuppie complex for the upwardly mobile and has all sorts of eccentric characters living within it. Unfortunately one of these is a Dr who has been experimenting on a new form of parasite originally for replacement of organs such as malfunctioning kidneys (itself a whacky enough idea) but in reality one that will heighten sexual proclivities within its host and spread with venereal prowess from person to person. In a jaw dropping first scene the Dr is grappling with a teenage girl in a school uniform and after strangling her, cutting her open he pours acid in her stomach and slits his own throat. It’s a scene that stayed with me for near on 30 years and like many others within the film, its one that’s impact has not lessened. Naturally we need a hero of types to tackle what is going on and luckily we have Dr Roger St Luc (Paul Hampton) to sleuth things up along with girlfriend, Nurse Forsythe (Lynne Lowry). The schoolgirl (actually 19) had been very popular with many of the male inhabitants of Starliner and so things spread quickly. One of the most affected is Nicholas Tudor (Allan Kolman) who starts sicking these things up in a bloody mess, none so more amusingly as one plummets over a window ledge to splatter on a doddering old ladies umbrella. The things are absolutely disgusting to look at resembling long slimy phallic bloody poo. You certainly wouldn’t want one in you especially if like bohemian lesbian Betts (Barbara Steel) it comes up through the plug hole and enters via the (well you can guess). The film is fast paced and things happen quickly leading from one delirious (did I really see that) scene to another as everyone goes sex mad. Women, children, old and young all get caught up in the mania. I should hasten to add that although content wise it may sound absolutely perverted things are handled with a certain amount of decorum and it’s not explicitly shot, the film is incredibly suggestive and that works perfectly without any need for it to move into anything resembling pornographic territory. The leads drive the action, Hampton being determined and reliable but Lynn Lowry as ever is a delight to watch. The actress who also stared in genre greats such as David Durston’s I Drink Your Blood (1970) Romero’s The Crazies (1973) Radley Metzger’s The Score (1974) and Paul Schrader’s Cat People (1982) literally sleepwalks her way through things exuding a natural, wan and listless sexuality. She also comes up with a most amazing bit of dialogue and one that I always think of as being part paraphrased by Linnea Quigley in Dan O Bannon’s Return Of The Living Dead (1985). The ever delectable Barbara Steele is also an unexpected but delightful addition to the cast list and plays her part brilliantly, captivating the camera. Watching it this time around I was struck by the fact that in a kitchen scene everything around the screen seems to be extremely phallic from the rather large carrot on the draining board to the ornaments dotted around the place, can’t say I had noticed that before. Also as is par for the course with Cronenberg things take on a very futuristic look (ok it may be considered retro and chic now) but the building, decorations and even the lines and arrangements all give it that sci-fi clinically spotless look. The use of slow motion to accentuate some of the more terrifying scenes works brilliantly too and really makes their impact all the more jarring. Shivers is a fantastic film that still punches in the gut and leaves you somewhat flabbergasted despite the fact that it is 40 years old.

Naturally it looks fantastic here too but unfortunately a problem has come to light and the film is unexpectedly cut. This would appear to have caught everyone including the distributors Arrow Films off guard, after all the film had been signed off by the director too but still it is missing somewhere in the region of 15 seconds, notably to the parasite scenes between Tudor and Dr Linsky. Naturally this does impact upon the effectiveness of the scene and renders this print as flawed. Luckily Arrow have quickly made a statement and are looking into things and have made it very clear that censorship has nothing to do with this. There’s certainly been a ding-dong going on about this issue on their Facebook page, but fingers crossed things will hopefully be corrected soon. That aside and I’m not brushing it under the carpet it is a major point, Arrow have gone all out with the extras and there is a lot to watch here over three sections running a total of 2 hours in length. First up are brand new interviews focusing on the recollections of Barbara Steele, Allan Kolman, and Lynn Lowry, effects artist Joe Blasco, along with film critic Kier-La Janisse. It’s suitably in depth and insightful and includes lots of interesting anecdotes. Blasco tells us a lot about the effects in the film that he devised and is particularly proud in the fact that he was the first to utilise use of condoms for the body manipulations of the parasite and that he brought them to life paving the way for other bladder effects in the future, notably Ridley Scott’s Alien 1979. He’s a bit of a larger than life character and certainly one happy to sing his own praise. With this and then the following On Screen!: The Making of Shivers” vintage television programme interviewing David Cronenberg, co-producer Don Carmody, as well as the cast and crew, we learn a lot. I was amazed at how many on set injuries occurred during the filming, the cast did not get off lightly and even Cronenberg who used his arm as a stand in on one scene with Lowry wielding a meat fork ended up getting stabbed. Barbara Steele almost ended up strangling him too on discovering that in order to make actress Susan Petrie cry she had insisted that the director slapped her to get her in character. After these there is a half hour “essay” talked through by Canadian film critic and author Caelum Vatnsdal taking us through the career of Cronenberg from his early shorts up to and including probably mine and many others favourite feature of his Videodrome (1983). There is a little bit of overlap and repetition but I really enjoyed watching these pieces. So Shivers, probably the greatest visceral and venereal parasite movie you will ever see and a film responsible for the phrase ‘body horror.’ There’s no denying that the film, despised by Canadian critics on release but doing much better in Europe is just as nauseating an experience today as it was 40 years ago. Just when you thought it was safe to go back in the bath it’s great to see it getting a new lease of life and hopefully those cuts (which you do see in one of the documentaries) will be reinstated so Shivers can get the full collectable release it deserves.

Oh and I should mention a remake reflecting “today’s social and sexual realities” is on the cards; sigh!