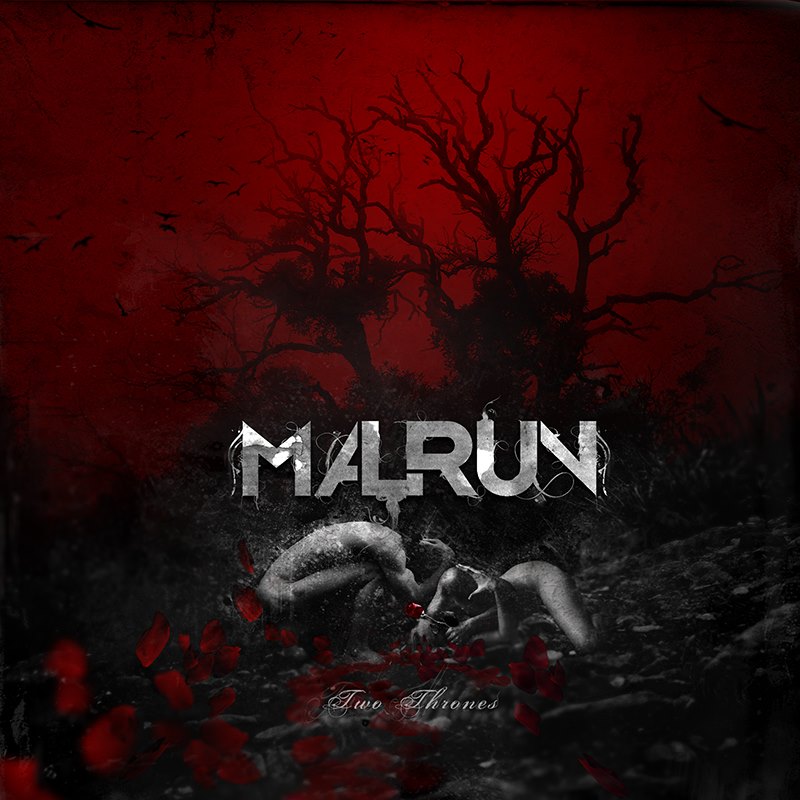 Malrun are a Danish 5-piece who play a blend of hard rock and melodic metal with that unmistakable Scandinavian sound – harmony leads, vocals which switch from clean singing to fierce growls at the drop of a hat and catchy hooks. Until recently, all seemed well in the Malrun camp, but on June 9th, the band parted ways with vocalist Jacob Loebner (featured on the album). With a new replacement found in Nicklas Sonne, the band have vowed to carry on.

Opening up with a heavily effects laden intro which swells in volume, the first single – “Justine” begins the album. The vocals are sung cleanly at first over a lead melody and metalcore styled rhythm before the chorus breaks in with its big singing sections. The interplay between the complex leads and the stop-start rhythms keeps the song locked down. In the breakdown sections, the harsher element of the vocals kicks in, adding some balls to the song where needed. “Forbidden Fruit” starts off with a dramatic intro. A wall of layered guitars builds the atmosphere before the song kicks in with both guitars seeming to follow the same line, adding an element of heaviness to the song. The vocals switch between clean signing and harsh shouts more frequently keeping the heavier sound and the breakdown section near the middle of the song has some twisting riffs and a hefty groove to it. “Cycle of Abuse”, the second single, follows up and it quickly kicks to life. The cymbals at the start smash right into a hefty guitar riff reminiscent of early-2000’s In Flames. The vocals keep up the switching pattern, staying clean for the big choruses whilst the guitars keep the precise rhythms up which have an almost metalcore edge to them at times.

Up next is a double feature – “Prelude/Serpents Coil” and “Serpents Coil” which would have worked better as being just one track. The first one of the pair is a minute and a half of clean singing, clean guitars and string samples which leads into the second part which is more metal sounding. It has the same basic melody of the first bit and a guitar solo which flows well with the song, but it’s not that impressive on the whole. “Bury The Dead For You” opens up with a modern-metalcore styled approach – technical lead guitar parts over the stop/start rhythm section. As soon as the vocals kick in, the song speeds up and gets into a good groove. The fast pace and cutting leads soon heads into a Peter Dolving-esque vocal section before tearing back to the sound earlier in the song. “Confessions” sounds more like an At The Gates number with its pounding guitars, harsh vocals and full on rhythm assault laced with tricky guitar fills at first, but it leads to a more melodic edge as the song goes on, once again, softening up for the choruses. The guitar break which leads into the solo is one of the high points of the album as it twists its way through the pace set by the rhythm section but the sudden end kind of kills the song off.

“Eye of Horus” has a slower pace to it with a slightly hypnotic drone to start out before it goes into the slow paced verse where the drums really come through and hold their own. The melancholy sound in the verse created by the vocals and guitars shifts briefly for the chorus but the vocals are almost drowned out by the rest of the band in parts during the track which is a shame. What isn’t a shame though, is the break round 3 minutes in. The huge scream followed by the lead section which jumps out at the right moment to bring the track to life is fantastic. “Light The Way” sounds like something from Insomnium’s back catalogue with its unique soundscape created by the lead guitar and rhythm section’s interaction, and the harsh vocal sections bring a new intensity to the album. “The Ignorant…” starts off with a huge metal riff but it soon switches to a more melodic, clean slow section which is layered with synths and clean vocals. The song kicks back into gear for the chorus with the metal groove and clean vocals and the guitar solo slips in round the mid-section of the song as the slower paced groove keeps up before it leads out with the chorus styled sound.

“Dance of the Satyr” brings back the heavier, melodic death metal sound. The galloping feel, pounding rhythm and heavy riffs grab you from the start and the harsh growled vocals make this one of the heaviest tracks of the album which is a shame since it comes so late in the album. The clean chorus sections return but the heavy sound stays underneath it. Closing the album is “The Ghost of You”. It starts off clean with a dark, moody sound which is backed up with a string section and emotional vocals. All of this teases at a sudden switch to the distortion which doesn’t quite come until halfway through the song, and even then it isn’t as fierce as you’d think. Its only in the final 2 minutes of the song where it kicks into life and hits full power musically, but the intensity and the gradual build up to this big ending is fantastic and it rounds the entire album up perfectly.

“Two Thrones” is a great album full of variety. It’s managed to balance the line between melody and heavy by incorporating elements of hard rock, metalcore and melodic death metal. The vocals are amazing and it’s a great swansong for the departing Loebner. It’s worth a listen for new fans to the Scandinavian sound as well as seasoned veterans in the genre.

At The Gates, Denmark, hard rock, In Flames, Melodic Metal, The Haunted