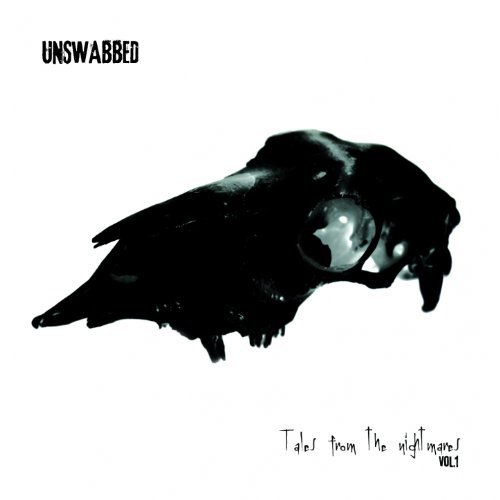 Unswabbed are a French outfit from Lille who have been kicking around now for near 20 years. With a handful of albums and EP’s under their belt, they’ve managed to share the stage with the likes of Cavalera Conspiracy, HED P.E and Caliban over the years. With little information about them floating about and the press-kit which came with the E.P, there isn’t much else to say really. It’s a 5 track EP which clocks in at just under 20 minutes and is ‘conceptual’ (sigh!) with a theme about nightmares (a given with the name of it). Let’s give it a listen.

“Come to me” opens it up with an almost punk feel to it but as it kicks in, it comes across as more hard rock sounding. Musically, it’s relatively simple with the steady drums, stabbed verse riffs and vocals which seem a little strained at times. The strain might be due to the fact this is the first release the band has done where they sing in English so that has to be taken into account, but as the song goes on, it seems like it gets easier. The song’s chorus is catchy and the ending of it has a great atmosphere, with the drums making it seem more intense at times. “Wake Me Up” starts with an eerie children’s nursery-rhyme styled thing sang by what one would presume are creepy children like those you see in horror films. The song kicks in with an almost nu-metal vibe to it. The riffs under the tormented sounding lyrics and samples help drive it along. The calmer sections after the verses are predominantly vocal with the singer begging to be woken up and took out of wherever here is, and in the later ones, the creepy kid vocals join in, rounding it off nicely.

“Hold The Line” follows up next. Starting with a simple drum intro and some faint guitar, the vocals join in, growing in volume and presence along with the song. As it kicks in fully, the strained singing over the slower paced track has a slight hypnotic feel to it. As it teases between the light and heavy sections, the bass really shines through in the darker moments later on in the track and the vocals get stronger with some shouts and growls adding to the intensity, giving one of the best moments of this short disc. “Dead End Zone” begins with a light hearted pop-punk styled melody. The bright sounding guitars with the happy sounding yet dark lyrics make for an interesting contrast and it stands out quite well compared to the rest of the tracks. As the song progresses, the light hearted feel to it takes a turn to a darker sound. The guitars play lower in the small breakdown section before swinging back to the happy feel and overall, it works brilliantly. “Pull The Trigger Again” is the closing track. It opens up with a short guitar line underneath some samples before kicking in. The heavily fuzzed instruments in the verse give it a heavier feel and the vocals are back to the usual sound of somewhere between hard rock and metal. Like all the songs on the EP, it’s simple in its approach and works well enough for what the band are trying to do but at times it leaves you wondering what the band could do if they put more into it. About three minutes into the song it takes a very nu-metal style sound with turntable effects and harsh screamed vocals out of nowhere before returning to the usual vocal stylings until the track gradually fades out.

Overall, it’s a short EP which aims to show the new direction the band is headed in and what they can do. It has its moments, most notably the standout track “Dead End Zone” but apart from that it’s pretty bland really. If you’re into the hard rock with some nu-metal and punk sounds, it’s worth checking out, but apart from that, there isn’t much else to say on this one really.