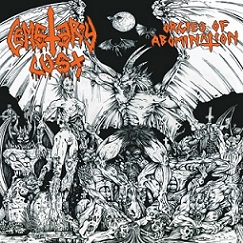 Calling yourself Cemetery Lust and describing your musical style as rapethrash means that you are either going for the antagonistic troll method of gaining notoriety or the misguided fratboy style. With these guys the balance is about 60:40 in favour of the fratboys, with the product being the musical equivalent of a mash-up of Porkys and Return Of The Living Dead. In many ways Cemetery Lust sound as if they have come straight from the 80’s; the decade that taste forgot, and they very clearly left taste at the door when they came in to record this one.

There is very little variation in tempo, tone or style, so after a while it’s a bit hard to keep track of whether we are having sex with zombies, Jesus, the Devil or cyborgs (all of whom get interfered with at some point), and the vocals of Evil Andrew are about as bog standard as you get. Ok, so it may not be the best album in the world, but on the plus side it most definitely isn’t the worst either. It may well be run of the mill death thrash but so long as you don’t subject it to too much scrutiny it will play in the background at any mid to late 80’s metal house party without any complaints being raised. The songs are generally short and punchy if lacking in any finesse or any real catchiness.

Cemetery Lust’s primary means of getting your attention is to offend, and some people are easily offended enough to make a big deal out of it should they ever stumble across these guys. Truthfully though, it’s just a massively clumsy attempt to gain notoriety through shock value. Calling one of your members RayPist is obvious, and spending your entire time making outlandish claims of your zombie sexual prowess is just yawn inducing. As I said, these guys belong to the 80’s really. The PMRC would have had a fit over them, and no doubt made them very rich in the process. As it stands they are like a heavier version of Steel Panther, being journeyman musicians making sex jokes, except that they largely forgot the jokes this time.