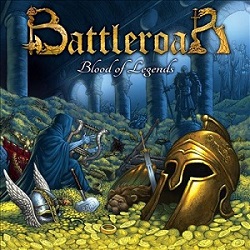 Greek metal outfit BattleroaR (apparently that last capital R is important…) are one of those bands I’ve been aware of for years but save for a fleeting listen a long time ago have never properly crossed my path. So here I am, listening to them as though they are a new band which, after a hiatus of six years having lost half their line-up may not be a bad approach. So unencumbered by historical baggage here we all are.

After a long but rather excellent moody, violin led intro ‘Stormgiven’ we then find ‘The Swords Are Drawn’. This is immediately big, beefy and epic heavy metal. Vocalist Gerrit Mutz comes across like a more muscular Michael Kiske with less of an air raid siren, commanding the galloping riff with a confident and expressive tone if with a distinct edge. This is classic heavy metal, one foot in Manilla Road kind of feel, the other firmly and determinedly on the Hammerfall power metal pedal. Hugely melodic but powerful, a mobility and strength that immediately impresses and appeals bursts through and the fact this band have a fine charisma just pulls the grin out. The violin is used so very well on songs like the title track, accentuating the epic and cinematic not the folk and being used as others might slap in keyboards. When they slow things, bringing them close to a Candlemass tempo on such songs as ‘The Curse Of Medea’, it also lends a melancholy which does them well.

Occasionally there is a misstep for me. The seemingly endless, highly cliched refrain of ‘Immortal Chariot’ irritates me beyond measure and on repeat listens becomes the skip/put the kettle on track. There are also the odd moment where they really do dip too much towards Hammerfall for me but that is just my problem and probably not something to bother their target audience. And besides for every moment like that there it’s another rousing chorus elsewhere.

It is also worth mentioning how well-crafted the backing vocals and choral sounds are. On the utterly sublime ‘Valkyries Above Us’ where the violin takes many of the lead guitar lines, the uplifting, mass vocals just blew me away and left me, misty eyed staring into the clouds of legend. Ah yes, you have to want to listen to heroic metal like this and dyed in the wool crust punks would probably be giggling into their cider, but everyone needs a break from the grinding down of the industrial world and BattleroaR as good company as any and better than many.

Whilst there are a couple of borderline fillers & one irritation of a song here, on the whole BattleroaR have reappeared with a fine collection of epic fantasy inspired heavy metal that should appeal to any fan of classy power metal, probably quite a few folk metal fans, a couple of Turisas fans and more than the odd Amon Amarth one too. The violin playing here is simply superb and ends being the backbone of their epic sound, the vocals are assured and the songs well-crafted and full of life. Go on, give ’em a go. You’re in safe hands. Let go your hipness and indulge your heroic side. That needs feeding too.

Rather warm hearted, epic and immersive they did indeed surprise me and broke through my defensive cynicism; what’s not to like about that?