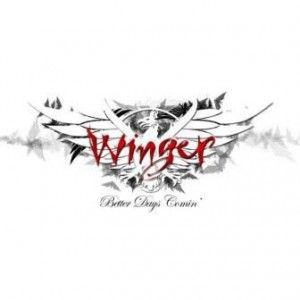 Winger? On Ave Noctum??? What’s the world coming to? Actually I thought something very similar when I heard their largely overlooked “Pull” album back in 1993. Reportedly feeling annoyed and misrepresented by Beavis and Butthead’s portrayal of the band as “only for wimps”, Kip Winger set out to show that there was a more Metal side to the band and therefore “Pull” was born. Or so I was told – I was in a Melodic Rock/Metal band at the time, our singer (an authority on all things melodic…just unfortunately not where his own vocals were concerned…) was into them and he lent me the CD. I have to admit, it had some good, groovy tracks (‘Junkyard Dog’ especially) on it and the band’s popularity in the 80’s as well as now can’t be ignored.

Now, I wouldn’t class myself as a fan of the band – indeed, that album was actually the last one I heard by them and they have kept producing albums on and off since then, but there was a track played on a well known Rock radio station that I happened to be listening to the other day and I was gob-smacked when the DJ announced it was Winger! So much so that when this album was rather half-jokingly offered to me for review (this IS Ave Noctum!) I said I’d give it a go – and they do have the considerable talents of Whitesnake guitarist Reb Beach in their ranks after all! It was a decision that I feared I would soon regret when I saw the opening track was called ‘Midnight Driver Of A Love Machine’ (Shudder…), but Winger were always about big catchy choruses and, tongue-in-cheek lyrics aside, that’s what we get from the off. I was pleased to hear that the heavier/dirtier guitar sound I remember from “Pull” has been retained and next track, the groovier ‘Queen Babylon’ certainly wouldn’t be out of place on a Pink Cream 69 album. But ‘Rat Race’ is where the album really gets my attention. Up-tempo and ballsy, it has a great riff, a driving rhythm (if world-class drummer Rod Morgenstein had another bass drum going it would be Power Metal!), a cracking solo (as you would expect from Reb Beach) and the obligatory big chorus – it all works rather well!

The title track has a funkier Electric Boys feel, whereas ‘Tin Soldier’ has a more progressive edge to it and a really attention-grabbing main riff. It happily takes until the sixth track to cop for a ballad, which is pleasant enough, ‘So Long China’ has the more commercial feel of their debut to it and ‘Storm In Me’ is another groover where Kip Winger backs up his reputation for being a really strong Melodic Rock vocalist/frontman. They do squeeze in another, rather gloomier 90’s sounding ballad before the closing track ‘Out Of This World’ brings the album to a close with a lengthy laid-back 7 minute anthem that gives Beach another opportunity to shine – and that lead-work really shines!

Winger are what they are, and they do what they do as well as anyone else in their field. They aren’t out to win any new fans by smashing genres – they don’t need to. If you already like the band then I’m sure this is a great addition to the band’s catalogue. And personally I feel that any band with this much talent and the capability of writing a Melodic Metal gem like ‘Rat Race’ are worth a listen any day.