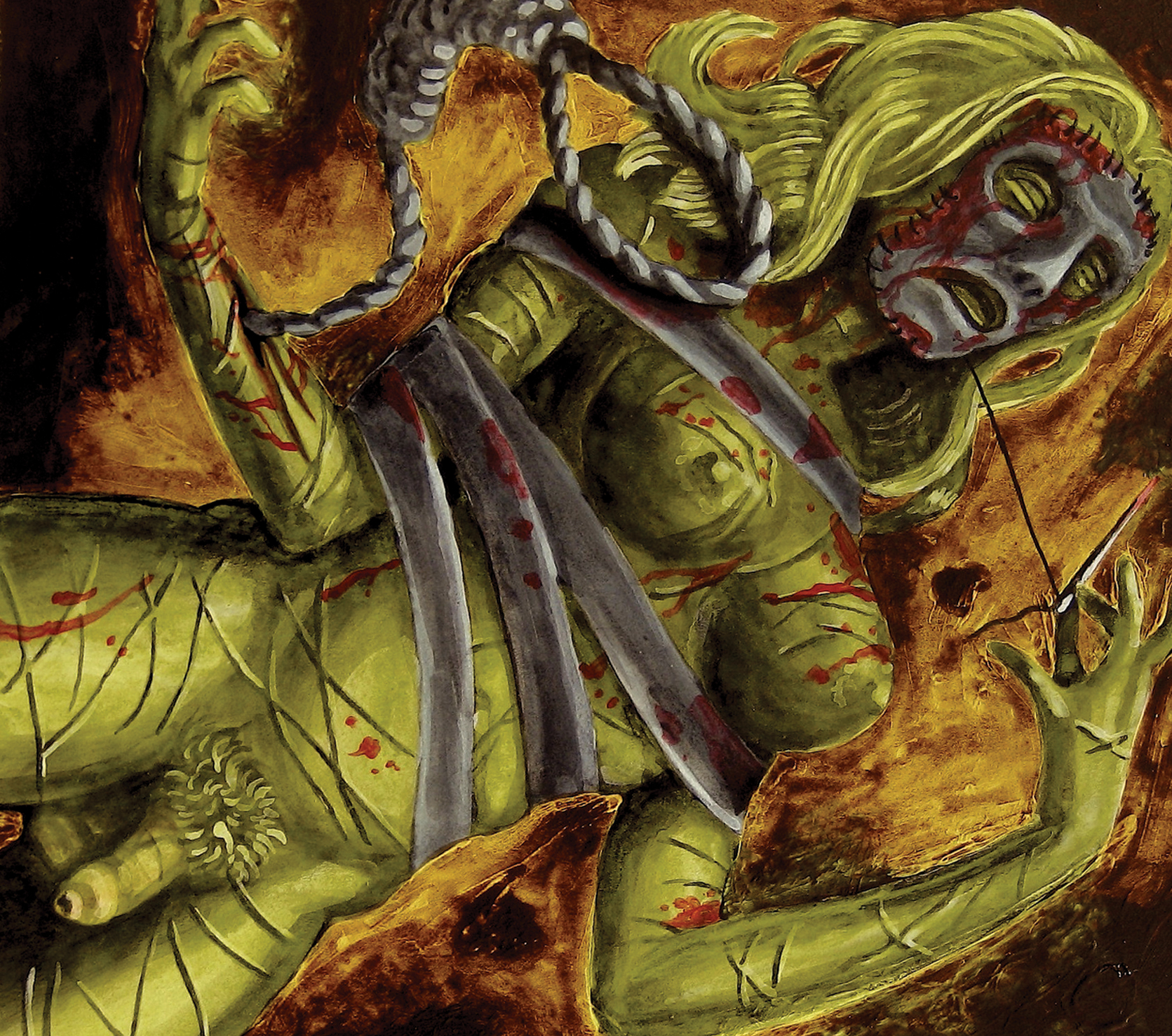 The last album by Lord Mantis 2012 release ‘Pervertor’ was a rancid, vile seething mass of corrosive guitar work and scathing vocals so as soon as this appeared I was quick to grab it and throw it on my review pile. This was before I even saw Jeff Whitehead’s (Leviathan, Twilight) stunningly grotesque and no doubt to many offensive artwork. Could the music contained within live up to this? Well of course it can is the easy answer. There is some real hateful, call it anti-human stuff coming out of the USA of late, I am all but recovering from the last Twilight album a particularly bilious affair and now this has come and knocked me flat on my arse all over again.

I definitely prefer Lord Mantis to any of the members other projects which contain among them Indian, Avichi and Abigail Williams and having seen those associations before I really didn’t think I was going to particularly like or even get Lord Mantis in the first place, boy was I wrong.

Body Choke starts this seven pronged beast off somewhat slowly, limbering up with doom fuelled grooves and some shrill sonic noise in the backdrop, drums brood in voices gabble and shrieks loom out the ether before a black sludgy morass of noise and glistening riffs gather like storm clouds about to drop hell on you. Charlie Fell’s vocals are excellent, they have a bit of effects on them making his vile yet understandable rasps sound utterly caustic. Suddenly things explode, I was kind of expecting that and although a short burst it completely obliterates before the main frame of the song restores an already horrid balance. It’s a bit like Ministry at their most deranged mixed with Necrophagia and early Today Is The Day and it’s an absolutely devastating sound and place to find yourself in. Naturally with that in mind I’m not complaining in the slightest. ‘Coil’ circles and loops and almost devours itself in the process. It’s kind of loose and springy and vocals, few that there are on this shorter number, are like a Battlestar Galactica Cylon. It’s an odd one but melodically mesmerising as it unspools. The title track is next and full of rage (no make that “fucking rage”). It seethes, spits and snarls, the drumming just whacks and thumps away, guitars are played in a fashion that must make fingers bleed and vocals sound like they are spewing black blood. Despite the barrage that this is there is no way it could be described as un-musical, melody is there in thick tarry spades as this literally despoils all in its path and drowns you in its filth. It’s definitely a song well and truly worthy of naming an album after!

A ranting diatribe sees ‘Negative Birth’ reverberating with elongated vocals as everything oozes out behind them and explodes into a fully charged rampant mass. It really does seem as though a plague of locusts have suddenly descended and are laying everything bare but what a glorious feeding frenzy this delivers, with utter devastation and annihilation coursing through its veins. A bit of a tribal sounding vibe permeates ‘Possession Prayer’ with the mantra of ‘blood, rust, incinerate’ running through it and a gloomy industrialised and robotic feel to the music. It’s still hateful as hell and there’s no let up as it consumes! The ten minute ‘Three Crosses’ might be an endurance test but if you have made it so far it’s going to be a hell that you will revel in as it spits venom and fire out in slow pulses. When a sudden lush guitar melody speaks out it is like an oasis of tranquillity in a sea of flames and although only a teasing refrain it’s going to have you begging for it to make a reappearance and when it does it’s completely sublime. A chilled out outro piece ‘You Will Gag For The Fix’ is the come down from this, an atmospheric ambient float off with a maudlin feel of hopelessness and despair before silence is once more restored.

As hoped this is an exceptional album for anyone who really likes extreme music to get their hate fix on to. I am likely to be playing this when I am angry which pretty much means I’m going to be playing the shit out of it. Life just got that bit uglier!