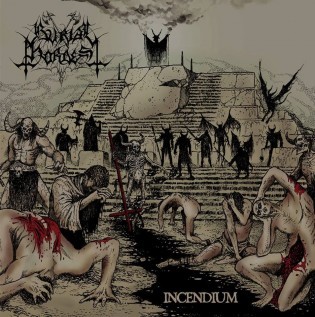 I must admit, being sent underground metal albums to review is great. Partly because of laziness (I don’t have to leave my house to see brand new albums), and partly because, quite often it’s a voyage of discovery about all the great, unknown bands out there whose path I’ve never crossed before; bands who have their own sounds, and have been ploughing their own dark furrow for years. It is a joy to discover those bands and learn for the first time about their efforts. One such band is Burial Hordes – a grim, grisly bunch of Greeks if ever there was one.

I must admit, I was surprised to learn that they were Greek – not that being from a particular country should necessarily dictate what a band sounds like. There is no trace of the classic Greek black metal sound on `Incendium’ – instead we have wave after wave of grim, primitive, dark and crushingly heavy black/death metal that sounds like it was created in a dank, slimy cave somewhere. There is not a hint of sunshine anywhere on this album, no light to counteract the all-pervading darkness.

The music blends two different strains of black death metal to good effect. On the one hand, there is the pure, raw, grim, nasty and primitive side; sludgy, detuned and bestial. Sometimes it is furious and blasting, sometimes it roughs you up in a neck-breaking crushing mid-paced way, and other times it slowly, unhurriedly drags your bloodied body slowly to the sacrificial altar. It reminds me of a lot of early, fetid death and black metal, where the emphasis was all on creating a dark, heavy and oppressive atmosphere. The other side that the band demonstrate occasionally is the more hypnotic, avant-garde end of black metal. In between the primitive and grisly riffing, you will occasionally be greeted by a drifting, creepy, soul-sapping interlude; repetitive yet darkly effective. In fact, Burial Hordes have a good, dynamic approach to song writing, which means that the repetition and often primitive approach work well to maximise the unholy and oppressive atmosphere.

There is some great, yet subtle guitar work on the songs here; a mournful arpeggio here, a melancholy melody there, interspersed with pure visceral darkness. The vocals are perfect for this – deep, fury filled gurgles and growls punctuate the proceedings., adding to the grim feel. However this is no cheap, shoddy affair – the production is top-notch and really brings out the best in Burial hordes’ sound; the growls have a wonderful echoing accompanying them, and the whole thing has a crushing, cavernous quality, without losing any of the clarity or heaviness. The deep throb of the bass guitar is also present (not often heard on a black metal album), and shows off some very creative bass lines.

Complete with a seriously nasty, underground-looking CD cover and lurid, demonic artwork courtesy of Mark Riddick, this is a great underground album, full of darkness and demonic wrath. Don’t expect an abundance of melody, but do expect to be highly satisfied if you are in the mood for a barbaric slab of grisly, bleak and heavy black/death metal.