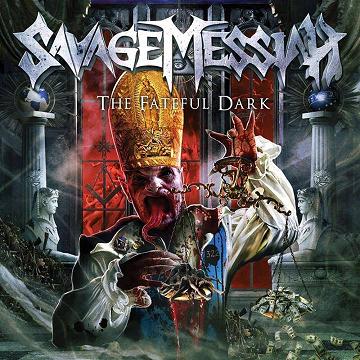 The fourth release from this London Thrash 4 piece is a meaty affair, helped in no small part to the production of Scott Atkins at Grindstone studios.  When I say meaty I am talking full on Brazilian barbecue gut buster not flaccid service station burger!

Savage Messiah as a band wear their love of Maiden and Priest with as much pride as they do Teutonic and Yankee Thrash gods.  This is not beer drinking party thrash dressed in acid green surf shorts (nowt wrong with that of course!).  I hesitate to use the word progressive due to the picture it can conjure (Rick Wakemen in a silver cape?) instead I prefer the word epic as used in the press release by Earache. There is true” epicness” evident here in the way Painkiller was epic, no overblown Euro synth power metal with sub Hollywood voiceovers. Just heads down horns up heavy fucking metal! Phew! That’s that out of my system.

The band are so confident about this new material that they played a set consisting of tracks from The Fateful Dark with only one older track on their recent tour with Havok. A bold move but one that was worth the risk. I witnessed the show in Norwich and the band presented the new material with gusto including album opener ‘Iconocaust’ which delivers as much punch on MP3 as it did in the flesh.

A classic thrash opener, chock full of melody and riffs and soaring vocals. The Savage Messiah stall is set out from the get go.

‘Minority of One’ opens with a riff reminiscent of Anti Social by Trust before the rhythm section of Stefanio Selvatico on bass and drummer Andrea Gorio set off at a gallop with David Silver and Joff Bailey intertwining leads and riffs over the top. Lovely stuff. This is not pedal to the metal from start to finish and the change of pace gives this a track an anthemic feel.

‘Cross of Babylon’ is pure Bay Area thrash and could have Chuck Billy and his cohorts looking over their shoulder with a twin guitar break reminiscent of Seventh Son Maiden.

‘Hellblazer’ strays a little too far into Priest worship to be truly original. (Is this a title mash up of Heel Patrol and All Guns Blazing) That being said originality can be a fickle friend whereas this fella will take your hand and drag you into the pit and pick you up when you go down. A classic you’ve (almost) never heard before.

Next a ballad. David Silver has the pipes to pull it off and the guitar work is intricate enough but I am not one for waving lighters or mobile phones. I’m gonna make like a prawn crisp and Skip.

The title track follows and delivers a huuuge dirty heavy riff from the off before segueing into a great chorus and even harmonies – think Metal Church meets Testament here. Great stuff.

At this point in the review I have to point out an issue I had whilst writing it. Earache – like many labels provide the reviewer with a link to a streaming of the album . Thus meaning I can control the stop start of the music but not how I listen to it. I make this point now as I reckon Zero Hour would be a great track to drive to. It is hard not to turn reviewing into an academic exercise rather than gut based enjoyment when I am tied to the laptop. (Such hardships, how does he cope etc etc).  Someone needs to play Zero Hour to MegaDave as this is what his band should be sounding like in 2014.

Next up ‘Hammered Down’ plays like its moniker, offering visions of mosh pit mayhem on a midsummer afternoon. I can almost taste the warm cider! There is barely time to drain the imaginary can before ‘Scavengers of Mercy’ kicks in with more of the same.

2000AD and Metal go a long way back thanks to a certain band from New York and as a long standing lover of all things Zarjazz I clocked that the final original track on the album is called “The Cursed Earth” the moment the file opened.  What follows is more of the Savage Messiah epic sound but no hook, though I can imagine the chorus being screamed back at the boys from a packed pit.

Packaged in with the album come three covers by three giants of the metal world – Maiden (figures huh?) Diamond Head and Motorhead.

“BE Quick or Be Dead” is a faithful enough rendition but doesn’t really add anything to the original and it doesn’t really suit Silver’s vocal style. The sound is undeniably Maiden musically though and this would go down a storm live.

Diamond Head – the band that found resurgence due to covers by an emerging thrash band – history repeats.  By covering the title track from DH’s debut album Savage Messiah both create a link with Metallica and set their own path. A great cover with real groove and feeling.

Covering Motorhead is a daunting task. No one else can get the Lemmy bass sound or the urgency of attack that the band deliver. However, this is another great cover of a lesser known track and is definitely worth a listen with a vocal line reminiscent of Lemmy but without becoming a parody.

The Fateful Dark – A steel strong album proving that the UK can still play with the big boys of the new school of Thrash.