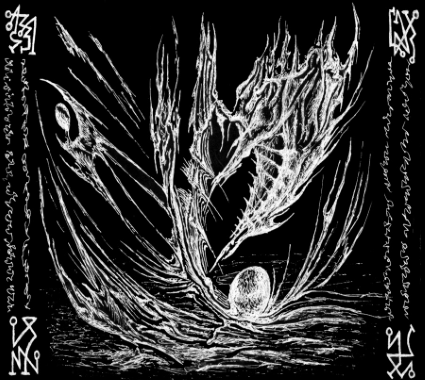 There isn’t a massive amount of information about on Profezia, they’re far too kvlt for that. However, what I have managed to cobble together is that it’s mainly the project of Kvasir (also of Italians Abhor) these days, although in the past it has also featured Ynleborgaz of the brilliant Danish black metal band Angantyr among its ranks. ‘Oracolo Suicida’ is the bands third full length album (and first for long running US purveyors of blackness, the Moribund Cult).

Profezia are a black metal band plain and simple, with their foot set well in the early 2nd wave Norwegian sound, as well as many of the monochromatic strains of the bands who crawled out the Mediterranean in the early 90s. As for this album, well, it’s certainly cold as you’d expect, but there are two things that hit me more than anything else. Firstly, the one dimensional fizzing production, and secondly, the violin work which is a regular fixture, seemingly to create an extra dimension of sorrow to the already pretty miffed sounding riffage. To be honest, without the violins, the proceedings would’ve soon become monotonous; and this is simply because the riffs just aren’t there in any sort of quality. There are a lot of generic black metal motifs pulled out, not to mention a good furrow of well-worn paths re-trodden, but plain and simple – the guitar really doesn’t drive this album onwards. This album is (somewhat strangely I might add) mainly focused on the melodies of the violins, with everything else a mere accompaniment. However, even with the mighty violin put under so much pressure to carry this album, something still doesn’t quite sit right here, and they haven’t pulled off what I expect they set out to achieve with ‘Oracolo Suicida’.

Simply put; their addition of weeping, sorrow-filled violins doesn’t really do much for me whatsoever when their usage is restrained like it has been here. Occasionally they will work when drawn out to let breathe in a few sections, but these moments are few and far between. Even then I’m still not really convinced they’ve managed to capture the multi-faceted beauty of the instrument when they’re supporting it with 3rd rate Darkthrone riffs through a 10 watt practice amp with all the knobs turned to 11. If you’re going for something more than your average generic black metal (which it seems they are), why shackle it with such a low-fi sound? It just really doesn’t work.

Again, to me this just sounds like something which has been conceived with good intention which just didn’t really turn out as expected. Rather than a storming blast of icy black metal with a truly heart-rending addition of violin-work, they have released a fragmented, confused and tentative record with all the clichéd romance of a Mills and Boon novel.