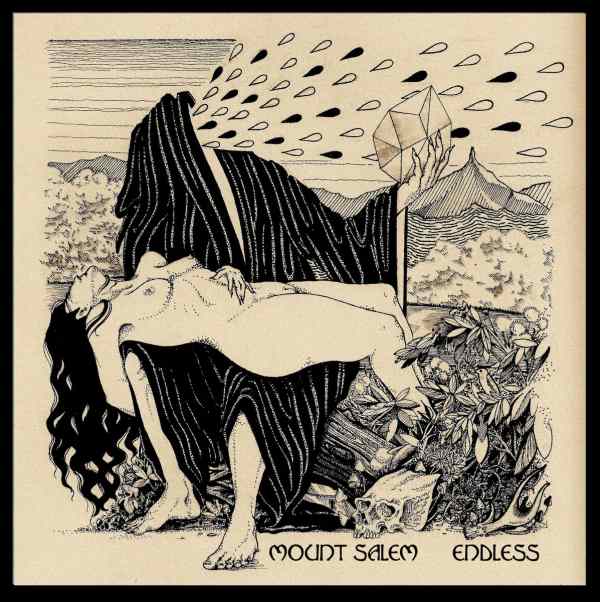 When is an EP not an EP? When you add two tracks to an already 34 minute EP I guess. Still, label and band call it an EP so we’ll just think of it as good value, eh? Right. So this is still technically their debut release. And if I told you there was a band called Mount Salem and they had a female lead singer I’ll bet I know what you think they sound like. And you’d be right. Just remember that surprises are not always good – I mean you and me would be pretty pissed off if we discovered they were a Justin Bieber covers band….

So. Mount Salem, Chicago IL. A more crunchy, less dreamy Jex Thoth, a bit of Blood Ceremony without the flute so also a good dose of that psychedelic twist on Sabbath and Pentagram down at the base. Nice and strong riffs with a fine fuzzed but heavy tone and lovely muddy lead breaks. Really good strong witchy vocals; clear and bright over the bludgeon riff and with just the right tail off drawl. Add a nicely judged organ sound, never drenching the music, and you have a seriously tidy group on your hands.

So it’s down to the songs.

Opener ‘Good Times’ is a catchy, swirling mid paced little bad dream number. Emily Kopplin’s voice reaches out effortlessly over the groovy riff, weaving a little witchy dance through a strange night indeed and it isn’t just a good song but a nice showcase for what Mount Salem are about. Things slow down for ‘The Tower’, floating into Jex Thoth territory with the simple chorus melody repetition which is nice enough and ‘Lucid’ brings the bounce in kind of the same way Orchid do. It’s all good as far as it goes; groove heavy, fuzzed out, psyche with tightly written songs and heading straight for its target audience with class and aplomb.

Maybe I’m just reaching seventies saturation point, or maybe I am actually searching for a surprise but by the time I get to ‘Hysteria’ and ‘The End’ (via a couple of doses of ‘Mescaline’ I and II) I’m finding it all drifting by me a little. Mount Salem really are good, no argument there at all, and there are good songs here but I’m just not getting the spice bite to raise it above all that into ‘special’.

Aficionados will dig this, quite deeply I suspect. Roadburn like them enough to hand them record of the week. Me, I’m going with solid, talented but still in the pack. Debut release though, so I’ll take another peek when the album they’re working on comes out. Maybe it will surprise me.