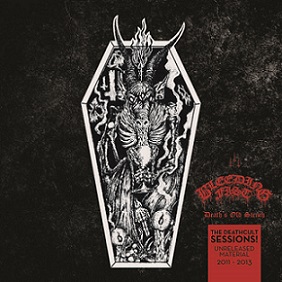 Slovenian black metal act Bleeding Fist has seen fit to release a selection of tunes previously unreleased and recorded over the period of 2011 and 2013 for your delights. Quite often the Eastern European countries unleash some of the most savage and primal extreme music you’ll ever hear with many of the bands holding the old guard in particularly high esteem when writing their own demonic compositions and Bleeding Fist are no different as the tranquil intro piece leads into the stripped down “Holy Saint Of Death”. Noticeably the sound has an old demo like quality which suits me but may not suit more sensitive ears (read as wimpy), though black metal was and still should be recorded unblemished by modernised production antics. The groaning vocals accompanied by tortured screams are suitably grim.

Most black metal of 20 years ago was rife with variations in tone and speed and this follows that template admirably with shifts in tempo from slow mid paced beats to ferocious barbaric outbursts such as those on “Brotherhood Of Chaos And Death” which starts with a sombre droning funereal structure. The speed influx is nothing short of bedlam and works to terrify the listener with its 80s style menace on the guitar work. The groaning vocalisations on “The Veiled Crowned Queen” typify the eccentric side of black metal with theatricality showcasing the bands experimental side but still within the confines of stringently laid down black metal rules, much like Czech band Root in some respects.

“Azazel” is a longer tune and the moment it starts  hits you square between the ears with the trudging beat, though the vocals are purely blackened squawks and roars, complete with death grunts. I found this a very interesting album to listen to and despite not being familiar with the bands back catalogue it has enough creativity to encourage me to investigate more. Much of the material here can be likened to old Ancient or even Dimmu Borgir, the bare-bones sound alongside the multitude of vocal inflexions and guitar work make this a very worthy release to at least check out before parting with cash.