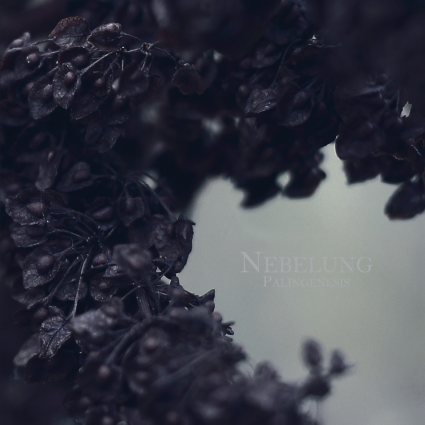 Two guys and one girl wearing neat autumnal knitwear stare out into the camera lens with a dense forest spread behind them. Promo shots can give clues about what the music may be like and in the case of Nebelung they are pretty much a given. We are told a bit more in the promo notes and it is all about rebirth and recreation based around the title Palingenesis. Apparently the energy behind these concepts are taken up by these three  musicians who employ all manner of traditional instruments in their quest such as classical guitars, accordion, cello, Indian Harmonium, Hammered Dulcimer, Glass Harp, Frame Drums, Chimes, Bells, Rattles (no whistles). So we are off in search of that energy and play is pressed.

You could look upon this is a brilliant album of pine scented, neo folk which over six tracks takes you on a wonderful journey that expands the senses and unleashes shamanic states as it wraps its trance like waft around you. Then again you could look on it in a different way and try and do your best to desperately stay awake as the acoustic, mind numbing repetitive harmonies unspool in a chronically fatigued fashion where all thought of energy are quickly forgotten. You could stroke your beard to the very infrequent whispered vocal parts that are apparently based on ‘Fjellsti’ by Yang Ju-Dong, knowingly realising that they have to be spoken so quietly not to detract from the fragility of the music. Likewise you could think “what’s this load of pretentious claptrap, got a frog stuck in your throat, why are you whispering?”

Yep it is one of those albums that really is likely to divide the masses especially when the tracks are running up to anything in 15 minutes in length. It is quite a beautiful listen I will admit but after the first five minutes anyone in their right mind will no doubt be looking for something a bit more and wonder where it is all going. The fact that it goes absolutely nowhere is a bit like a bad joke or a French film that simply finishes leaving you wondering “why, what, how” and all frustrated. Perhaps I need to create the right atmosphere (something this is incredibly lacking in) to dig the sounds properly (man). Maybe I should go and sit in a forest and do so, the likely outcome I would be eaten by a bear which would be a relief and at least take this grass growing tedium to another level. Yes I have shown my true colours here and my thoughts are becoming more apparent on what I think of Nebelung. Their music is nice but dim and that is a polite way of stating it. This is music for bohemian hipsters to listen to in their fair trade, eco-friendly coffee shops whilst reading psychology text-books. That’s not so nice but downright honest. Zzzzzzzzz!