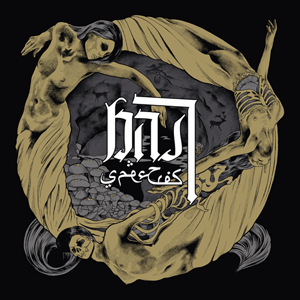 There are plenty of firsts about this album. It’s the debut by London based Bast and also the first release from Jon Davis of Conan’s Black Bow Records. Not only that but apparently it’s also the first album to be recorded at his new Skyhammer Studios too courtesy of co-partner Chris Fielding’s production. With this in mind one may think that it has a lot to prove but the combined talent of everyone involved should not have you concerned, especially if you have caught Bast on the road before. Conan themselves have plenty of faith in the band and are taking them out on their March jaunt, dates of which will be well worth attending if they swing by your town.

The trio have one hell of a hefty sound about them and musically they straddle a plateau based between doom, sludge and post blackness which is solidly enforced through the somewhat monolithic tracks of this five part album. A lone chord dismally seeps in as ‘In The Beginning’ starts this journey. It makes way for a rugged and speaker trembling furrow of layered instrumentation which is joined by elongated guttural yells from vocalist Craig Bryant. I am reminded a fair bit of the already missed earlier sound of Altar Of Plagues here and some of the guitar work is also reminiscent of the likes of Drudkh. I definitely feel the blackness here and the sound the trio make is dark and crushing. The doom aspects come through with tar like repetitive riffs once this monster slows and gets into a leaden groove. It’s one to get heads bowing in appreciation live but on album it works equally impressively and compels you to up the volume to speaker shaking levels. Without pause the song ends and broods straight into ‘Denizens.’ The vocals really hit the mark here and sound gloriously hoary. Combined with the slow mighty riffs and thick bass I am reminded somewhat of the mighty Crowbar here which certainly is no bad thing. As it ploughs off with I believe some backing vocals from Chris Fielding himself it fair takes your head off but the melodic structures are at the forefront too as it effortlessly breezes onwards. There is no problem of getting bored of this as the track hits a near ten minute mark, as you will be completely enveloped in its muscular riffing and gnarly cries. Things suddenly burst into life again for the title track, again there is no pause, making it all the more like one complete long journey and one full of danger. It’s best to hold on for dear life and cling on for the ride as some tribal drumming slows things down like you have entered enemy territory and word is being spread by their thumping message. Next its a stellar stoner jam out as the track canters off and makes a hasty escape. As for the light airy post guitar sound that suddenly lifts all the oppressiveness from things it’s a bit of a surprise but somehow works. After my first encounter with it I found myself kind of waiting for it on repeated plays.

You can forget about the vocals for a fair while as this track plays out (in a concluding fashion with a welter of massive drum beats) and into 12 minute instrumental ‘Psychonauts.’ It’s as mighty a number as its title suggests, standing strong and proud but in no rush as things gradually build like it is being constructed at ground level and slowly reaching for mountainous heights. It’s one of those “staring into the void” listening experiences as I call them. They don’t hit that often but when they do, whoa Nelly! And the album is not quite done with us yet as the equally engrossing ‘Outside The Circles Of Time’ is on hand to infinitely shift you further into another dimension. I’m skipping out of dissecting that though, some things need to have an air of mystery about them and this is an album that really needs to be heard and one that I am going to have to witness live as well. A fantastic debut!