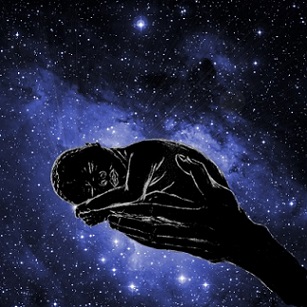 German one man black metal project releasing his second album of melancholic dark splendour which is adorned with what I felt was a bizarre if thought provoking cover art, showing the cosmos and a baby being held in arms up high as a gift to it. Starting with “Sternenklang” the eerie gentle piano ebbs and flows before drifting into a melodic black metal style with little aggression and a focus on atmospherics, which it achieves extremely well. Comparisons to other acts like Alcest are inevitable but whereas the latter has that shoegaze feel Agael prefers to decorate his music with various textures especially on the guitar work which I found particularly enthralling and captivating.

“Staubherrscher” follows smoothly with more atmospheric piano work and a gentle lead guitar piece backed by keyboards filtering through the mix. The vocals take on a clean guise after the harsh opening snarls and point towards the fact that lyrics have been written as one continuous poem throughout the album. Poem may seem a little pretentious but the way the vocals interchange through the songs indicates the song writing intentions. This is a transifixing album, very like Nordland from our own shores, the music invokes images of tranquillity merged with nightmarish sections for a multi-sensorial experience. There is a dark, ominous calling to songs like “Ewige Heimkehr” with their despondent riffing creating a bereft isolated mood that I found extremely relaxing despite the rancorous vocal delivery in places. The textural subtleties offered by “Menschensohn” are like shades of grey in a charcoal drawing with various musical components brushing lines against one another to create a canvas of melancholic blackness.

Albums like this are absorbing, solitary affairs requiring the utmost privacy and attention as I first listened to this album on an evening when the winds howled outside and the rain was rattling against the roof and windows like an additional backdrop to the album, surreal is an understatement. Agael is a talented individual and demonstrates a natural flair for musicianship and song writing by keeping everything on a level playing field, nothing is over played nor is any instrument or component over emphasised, they blend with each other like miscible liquids on “Nichtkonstanten”. A gentle keyboard piece introduces the guitar riff before a drum stick click initiates the tune but not as I expected with the guitar work meandering away in a world of its own. The songs sense of dynamics is excellent with the pace increasing and reminding me of Barshasketh who I got into last year.

Closing the album is the exquisite title track with its spacey keyboard introduction and piano accompaniment, in true Burzum fashion. As the songs enters a more blackened phase the pace is noticeably slow, doomy, almost funereal in atmosphere with the vocals taunting with low level groans before the guitar hook enters. This is a classy song, conjuring images of cloudless night time skies on a dark winters evening. The song has a trippy feel to me, as it slips in and around various keyboard sections summoning a sonic collage of distant landscapes and again a feeling of abiding tranquillity. This is a serene but potently addictive album that one can beyond doubt completely immerse yourself in.