Indian – From All Purity (Relapse) 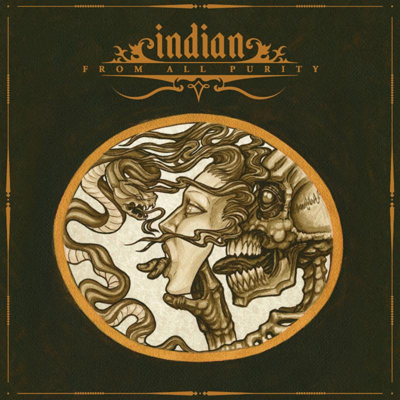 For people not seasoned to the harshest and most frightening reaches of the doom branch of the metal genre, Indian may come across as a rather uncomfortable and intimidating experience. However, it is in these conditions that the band thrives and this is more evident than ever on fifth full length ‘From All Purity’. Drenched in feedback, this entire record is a horrific experience from start to finish and one that will stick with you for better or worse.

‘Rape’ seems like an insensitive and slightly childish track title to open with, however, the sheer force of brutality let forth from this track proves the name is not simply there to shock – for want of a better phrase, this is like rape, but it’s happening aurally. To call this album ‘atmospheric’ would be a huge injustice – it is suffocating, claustrophobic and simply smothers the listener in sheer cruelty.

While simplistic, Indian’s song structures work to their advantage due to the fact they manage to take beats that would otherwise last a few seconds and stretch them out over a full five to eight minutes, making tracks such as ‘The Impetus Bleeds’ all the more unnerving. The vocals add the ultimate centrepiece to the restrained, yet heavy instrumentals; cutting through like a knife through butter with blood curdling shrieks and tortured howls.

What you’ve read above may give the impression that this is a bad record; however, this is entirely a matter of opinion. As mentioned earlier, for those that aren’t used to such evil sounding tunes will recoil in revulsion at the sound of this, while if you’ve fully embraced the power of blunt force trauma to the ears then this record will be a veritable treasure trove.