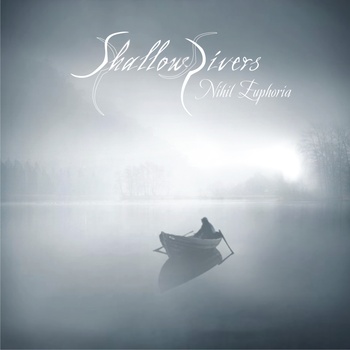 This album, the first full release by Shallow Rivers from Moscow, starts in orchestral and metal majesty. The opening title track then heads into a big section of despairing doom but impressively, it presses on and develops rather than grinding down into ponderous contemplation as can happen. The momentum is maintained with “Echoes of the Fall” which is heavy and growly but with a pulsating and airy passage which is like oxygen as it spreads unexpected light. The melody is captivating and mobile, dropping back occasionally into deathly depths.

Over the hour of “Nihil Euphoria”, atmospheres constantly change like the passing of the seasons. Yet there is a human touch about the mood changes which makes this album so epic. A heavy riff and growls mix with a sophisticated riff on “Leda and The Swan”. The album moves towards a forceful and expressive death metal section. The flowing nature and the dark elements tinged with suggestions of life have elements of Opeth about them, but Shallow Rivers plough on in their own sphere, interspersing the urgency with black metal touches and at one point a mystical chorus. The oxymoron that is Nihil Euphoria is explained easily. It is dark yet somehow in this ever developing death metal pattern, there is euphoria. “The Weeping Lotus Dance” is darker than most, progressing mechanically and ominously. This one approaches death metal in its purest form. The drum rattles along at a decent pace, finding itself being joined by distinctly Opeth-like guitar majesty and together progressing the story. There are whisperings of suffering but in the growly harshness and dark beatings, melodic majesty appears like the sun peering through grey clouds. The album continues to sway between death and doom but it’s always driving and poignant. Each statement is unique. There’s no standing still. “Down the River to Vortex” sums up the variety of this dark tome. From a devastating doom-laden start, the track builds up into swathes of exhilarating and mystical metal music. It is unstoppable. The album is rounded off with more potent doom and the orchestral majesty which we heard at the beginning.

The atmospheres of “Nihil Euphoria” are grandiloquent. I’m not sure what the theme of this work is, if any, but it sure reaches out beyond the mundane and through death and doom metal structures presents a picture of both gloom and magnificence.