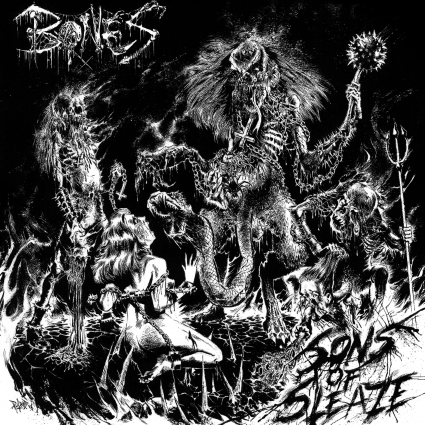 These days a lot of what passes for metal is gutless (and nutless), processed, over produced bollocks. God forbid we should hear the drummer getting tired and making the odd mistake, nah we want it super perfect so we trigger the fuck out of the drums. Same goes for vocals & guitar – it has to be perfect with nary a note out of place. Almost like the music is played by robots.

Well Chicago’s Bones are humans and humans make mistakes – but humans also have passion and guts too.

This has got to be the rawest slice of punked up crusty death metal I’ve heard this year. Production wise they make Nekrofilth sound like Megadeth!

Imagine there was a band featured in Mad Max 2 – old dirty grime encrusted road warriors playing knackered guitars with rusty strings and a drum-kit made from human skulls – this is what it would sound like.

Sons of Sleaze is their second album and is just full of brutal, dirty chaos. Not quite death metal & not quite crust punk but an unholy marriage of the two. It also features a cracking cover of Terrorizer’s ‘Fear Of Napalm’ and has some of the best (and grimmest) artwork I’ve seen this year.

This three piece (Jon Necromancer – bass / vocals, Joe Warlord – drums / vocals and Carcass Chris – guitar / vocals) are not kids. They kick out some horrible twisted noise and have an uncanny ability to it into some dirty rock & roll songs.  The raging “Poisoned Breed” and “Mindfucked” are great examples but the more mid paced numbers  like “Bad Signs” seem to drag on a bit. In fact that’s my only real  gripe – for this style of music the songs are just a bit too long – keep them down to sub three minutes and I reckon the next record will be a winner.