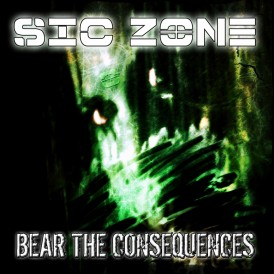 Singing along happily to “The Day You’re Gonna Die” and generally protesting about anything and everything may not sound like the recipe to a memorable work, but Sic Zone come at this album from an interesting angle. It would be ridiculous if they broke off from raw brutality and aggression to go progressive or classical and they don’t do that, but it’s clear that they do have a playful, if not experimental approach to this death-thrash assault.

The trick lies in the strength of the songs. From the blood-vessel bursting “Uncompromising”, there’s a real punch and melody about these brutal songs. The singer sounds like he’s been strangled twice over. Sic Zone seem to have inherited the German trait of making an extreme song catchy. There’s a strong groove line through this modern style of metal. Slower touches, punishing drums, strong riffs and well-worked changes of pace and breaks all add up to a series of mobile metal cameos. “Coma” even has an air of Dark Fortress in its creepiness but even though it threatens chaos out there, there’s no shortage of the forward-driving, headbang-inducing and melodically brutal qualities that this band seems to deliver with simplicity. From “Coma” we go to the whispering and creepy “Falling Lost Part 1”, a step change from the almost happy assault that precedes it. From this sleepy first part, the solid and crunchy modern metal returns and its back to screaming, punching metal lines with the twists that make this album more interesting than most. After a brief, mind-twisting open, there’s a hardcore-style track “My Control” but again that’s the clever part of this album – on the face of it, its gnarly modern metal but with the guitar work and those distinctive but not unpleasant vocals there are always moments of interest. In fact those vocals are bordering on manic, which works nicely with all the stops, starts and changes of pace which frequently break into frantic headbanging opportunities and at other times threaten to break down into metal chaos, but never quite do so. This is all very cleverly controlled. The forcefulness of it and even the vocals recall Rammstein, but whilst notably extreme, Rammstein manage better integration lyrically than “fuck you bitch”, which is what we get on the otherwise typically solid “Sweat Person”. This is followed up with “You can fuck my dick”, another pointless display of “attitude” which they’ve hitherto managed to demonstrate without lines to impress 15 year-olds. Moreover this is mature musically, hard and heavy and these lyrics add nothing but immaturity. The album ends with a live track, “Stale”, complete with sound effects and enhancements, twanging bass and metal menace. This track presents a different angle of the same band.

“Angry music for angry people” is what’s offered. Actually, I think Sic Zone do themselves a disservice by cultivating an image which is not only self-explanatory but belies the subtleties within this work of modern metal techniques. All in all, “Bear the Consequences” has balls-a-plenty, not to mention a decent dose of eccentricity about it, and is a blast.