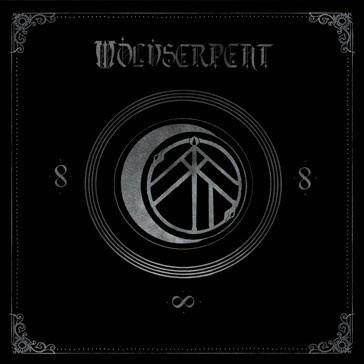 Some big words from Relapse on the latest release from this US-based duo here, Wolvserpent’s compositions apparently ‘gracefully wend their way through the valleys of death, drone, black metal, doom and chamber music and arrive triumphantly on foreign shores… to create works that are dark, emotional, menacing, cinematic, atmospheric and heartbreakingly beautiful’. Wow. Like I said, big stuff.

Combine this haunting hyperbole with four tracks (plus an intro) that clock in over the 80 minute mark and it becomes clear we’re not dealing with something easily digested here. No bite-sized chunks for this reviewer to get his teeth into, no, in this instance Blake Green (guitar/vocals) and the elfin Brittany McConnell (drums/violin) have set out to weave hypnotic, cavernous and sprawling epics that demand the fullest of concentration.

This last part however is perhaps easier said than done. Wolvserpent’s approach is commendable, sure – the rumbling sludge of ‘Within the Light of Fire’, bedecked with shrill spirals of black metal guitar leads and Blake’s growling vocals certainly makes for an imposing start – but it does go on. And on. Yes, the drone influence of Sunn 0))) and Earth is felt keenly throughout the record, dragging what would otherwise be relatively effective passages of doomy black metal into new realms of torturous, hypnotic repetition.

It’s a bold move and to put it mildly, it asks a hell of a lot from the listener. Drone/sludge/black metal is a particularly inaccessible mix and if one isn’t careful, the danger is that things can easily slip into the file marked ‘tediously repetitive’. Sadly, Wolvserpent don’t manage to avoid this trapdoor – the final track ‘Concealed Among the Roots and Soil’ boasts an effective two-chord progression, however this is repeated ad nauseam for nearly 10 minutes with virtually no variation, escalation or development. Of course, I understand that in many ways this is the essence of drone but there must be at least SOME sense of movement, an underlying impulse of travelling inexorably towards a form of resolution no matter how despondent. Sunn 0))) and Earth at their most effective describe a tangible sense of escalation, a gradual, painful inching towards an indeterminate fate – with Wolvserpent however, it more often than not is simply the case of half-decent riff being played utterly to death.

I’m sure the influence of drone producer extraordinaire Mell Dettmer has helped shaped elements of this record and there are moments here that could have come straight off of the Sunn 0)))/Boris ‘Altar’ split. Indeed, the sound concocted is suitably organic and some of the guitar passages wonderfully realised. The leads that coruscate across the second half of ‘Within the Light of Fire’ sound great. There are moments here straight out of the Weakling book of churning malevolence also – the simmering background keyboard drones, feedbacking guitar and tribal percussion poundings of ‘A Breath in the Shade of Time’ are heavily reminiscent of ‘Desasters in the Sun’ from the seminal ‘Dead as Dreams’ album.

A little less impressive are the much-touted ‘classical’ influences that we are told grace the album. 20+ years of classical training and an influence from composers such as Gyorgy Ligeti and Arvo Part suggests a yearning sense of mournful melancholia interleaving with the backbone of the music. I was really excited to hear how the band would weave this into their predominantly tar-black tapestry so to hear these elements reduced to a 10-minute violin intro to ‘In Mirrors of Water’ and then be essentially dispensed with for the remainder of the record was somewhat disappointing. We get a smattering of violin lines across some of the other tracks but they’re very much merged in with the general churn of the sound and don’t really elevate as much as they could.

Eighty minutes. Average track length close to twenty. It’s too much, frankly, particularly when there really are only enough ideas here to spread across perhaps half that running time, if not less. Stretching out sludgy, doomy black metal across a canvass draped in drone is all well and good if the atmosphere is present, if that unremitting sense of tide-like progression underlies the proceedings. For all the dramatic hyperbole, Wolvserpent unfortunately do not manage to achieve this for the most part.