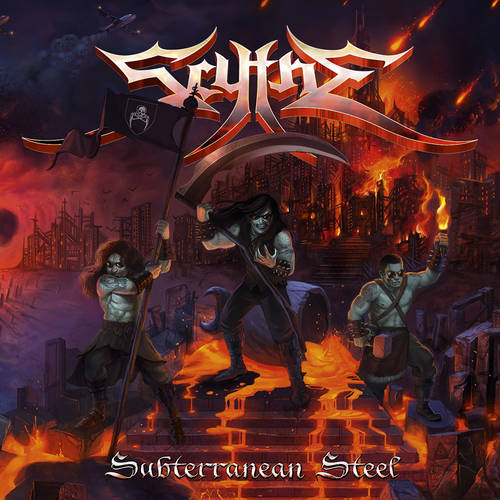 Few bands exemplified heavy metal like Usurper. With their no nonsense, full bore approach to their calling, they were like a Manowar that you didn’t feel ashamed to enjoy and it was a sad time when they decided to call it a day. Rising like a phoenix from the ashes of Usurper came Scythe, the new band fronted by former Usurper founder Rick Scythe. Last year’s debut ‘Beware The Scythe’ carried straight on from where the former band signed off with a glorious assault of pulverising metal, and this year’s follow up brings more of the same. Brace your ears for violence, for this is no place for the meek and mild.

Before even hearing a single note, I found myself already grinning like a loon at the cover of the album, featuring the silliest and yet most metal picture you will find anywhere outside of an Immortal photoshoot. Opening with the briefest of spoken word samples, little time is wasted before the ‘Leather Aggressor’ bursts in with rage and fury. A simple riff, blasting beats and an aggressive scream herald the arrival, and from here on there is little respite from the assault on the senses. My absolute first instinct from the first few notes was to crank up the volume as far as it would go as to play this at anything less than 11 would be an affront to the gods of metal. This is at the very least as aggressive as Usurper used to be with a raw and urgent feel to it, and Rick Scythe’s vocals and guitar sound has a distinct nihilistic black metal influence, yet it is performed with a thrashing violence that sets it worlds apart from any po-faced necrowizardry. The bass, performed by Dan Geist, and Joey Contreras’s drums are mixed to such a level where listening to this album is akin to 12 rounds of boxing, leaving you feeling mildly concussed. The production is on the fuzzier side of things, but that really doesn’t seem to matter in this instance and instead it plays to the early Celtic Frost and Venom vibe that it carries off so well.

The main thing that stood out to me when listening to this album is the toll it takes on you whilst you listen. It raises a fire in the blood that only a certain kind of true metal can, simultaneously energising you and heightening your senses like an immense caffeine rush. The inevitable flipside of that is the exhaustion you cannot help but feel when the album finishes, mental, aural and even physical as it was certainly making me get around faster and with more purpose; although I realise that it is wrong to get a mosh pit going on an underground train and of course I regret my actions absolutely. My solicitor told me so, so it must be true. Whilst metal as a genre in its broadest form is in reasonably rude health, you really could argue that it has needed a bit of a shot in the arm for a while. I believe that Scythe are the band that metal really needs right now. Wimps and posers leave the hall. The false and weak shall be annihilated. ‘Beware The Scythe’ was just a warning. With ‘Subterranean Steel’, Scythe will slay all in their path. Absolutely crushingly brilliant!