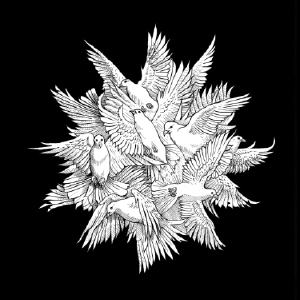 ‘Eldir Nótt’ translates roughly to ‘nightfire’ or ‘ablaze the night’ and this is precisely what German solo project, Fyrnask, does with his second full-length release; mysterious entity Fyrnd is casting a light amongst the solo black metal projects of the world and proving himself to be one of the best the scene has to offer. While many artists choose to put the drum machine on autopilot as they head off to make a sandwich, or douse everything in so much distortion it becomes barely distinguishable, Fyrnd’s approach is one which is both deeply atmospheric and utterly compelling.

This is by no means an album which should be included on shuffle or have the occasional track picked out at random; this was created to be experienced in its full 56-minute entirety. Each song is a swelling maelstrom of cutting riffs, blasting percussion and harrowing assaults of rasping vocals. Occasionally the rage is subdued with folkier sounding passages using acoustic instrumentals and Pagan-chant chorals calming the storm which makes for thought-provoking and inspired multi-dimensional compositions.

When taken into account how densely textured this music is and the sheer volume of equipment that has gone into producing it, it’s nothing short of remarkable that this entire record was produced by the work of one solitary individual. There are strong similarities to ‘Mammal’ by Altar of Plagues on this opus; not just in the use of non-traditional instruments and rustic, nature inspired ambience, but also in the melancholic feelings of despair, loss and solitude that it emits. You can almost feel the decay while listening.