Autumnblaze – Every Sun is Fragile (Pulverised) 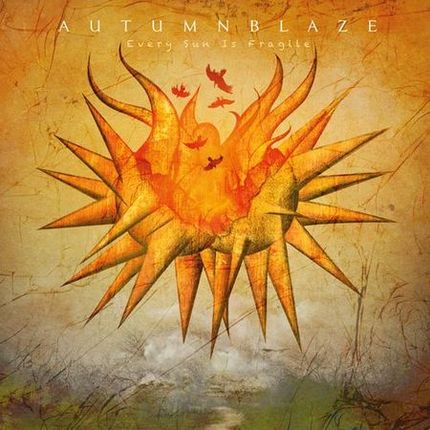 Both the title of this album and the band’s track record over their 17 years of gloomy output suggest that there aren’t going to be too many light moments here. This German band’s dark metal style has drawn comparison with Anathema and Katatonia. I’d say that Autumnblaze sound more like a cross between REM and I Like Trains, with the vocals sounding like Edwyn Collins in a melancholic mood. It’s only when they break away into thoughtful instrumental passages, as they do on the opening track, then later on “Cold Soul” and briefly on “How I Learned to Burn my Teardrops” that they start to sound like Anathema.

Autumnblaze are very good at creating delicate rhythms. Light acoustic rhythms ring out across the album and with a patient drum beat, set the general tone. Yet as on “New Ghosts in Town”, bursts of controlled heaviness can erupt, but always laced with anguish. It’s the prog emotion, always of a melancholic nature, which overrides the heaviness which seems there to support it. The light rhythms and patter of the drum are sounds to savour. Technical prowess aside, I did feel that “New Ghosts in Town” dragged on a bit. But this is the nature of an Autumnblaze track. “Invisible Fields” is typically dark and expansive, but in spite of the defect musicianship which provides a solid base, got stuck in the plaintive vocals. We’re all different so I guess someone might find the ultimate answer embedded in “Invisible Fields”. Not me, though. As I listened to “Im Spiegel” (In the Mirror), I reflected again that this latest melodic dirge crossed no lines for inventiveness and will never break the emotional equivalent of the sound barrier if I listened to it a thousand times. Is it a representation of life in its drudgery, I wondered. It heads towards heaviness but lacks a heart. I think I may have missed the point. “Mein Engel, der aus der Auge flieβt” (My Angel, who flows from the Eye) is quite nice in terms of its acoustic rhythm – definitely more REM than Anathema, I’d say – but as a whole it’s set out in a desultory and dreary way. The title track was no better. Pedestrian, the singer trots through the song with occasional heavy passages which served little context other than to wake me from my slumber.

Finally, “Cold Soul” had the heart and, I guess, soul which had been missing. Unsurprisingly it is another melancholic song which initially provided no inspiration but picks up like a swaying pendulum and through the instrumentals provides an emotional edge. “Cold Soul” is well constructed and in line with its title, is indeed cold and atmospheric. The problem however with this album is that it seems to canvas the avoidance of excess. The acoustic build-up of “How I Learned to Burn my Teardrops” reminded me of The Pineapple Thief. The mournful “A Place for Paper Diamonds” moves up and down and achieves the rare quality of being emotive and then finishes in a Katatonian burst. But “Verglimmt” (Smouldering) sums it all up – a patient and not unpleasant rhythm ringing out, but brought back to base by the tired-sounding vocals.

Whilst it is true that fist-pumping excitement was never on the agenda, this album reminds me of the joke where a man with a heart problem goes to see the doctor. The doctor tells the man to avoid excitement, so the man goes and buys a Scunthorpe United season ticket [says the Grimsby Town supporter Ed]. Instrumentally quite good but fundamentally lifeless, “Every Sun is Fragile” would seem to be for those who idea of a good day is to spend it melancholically staring into space.