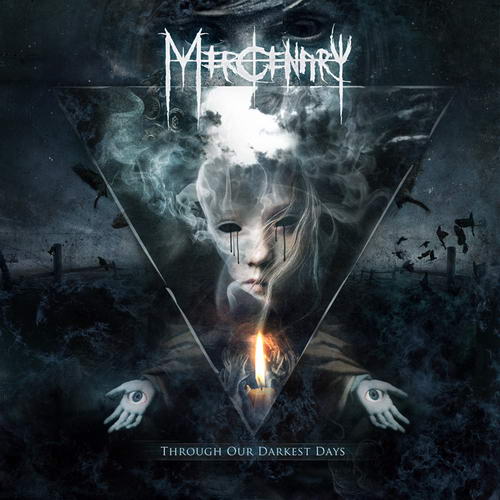 Let’s face it. This sounds like Mercenary and no-one else. I’m very happy about that. In case you don’t know what Mercenary sound like, the phrase “melodic, aggressive thrash metal meets sophisticated power metal”, which remains on the label stuck to my copy of their 2004 album “11 Dreams”, still applies. “Through Our Darkest Days” is Mercenary’s seventh full album release, and as you’d hope and expect, there have been developments. The previous album “Metamorphosis” (2011) marked a step change and a clearer, heavier direction compared to its predecessors. Along with a new direction came a new confidence and greater integration instead of compromising and fiddling round the edges. This said, even now when I listen to “11 Dreams”, there’s a great sense of freedom and even fun which comes across. “Fun” isn’t really a word I’d use to describe “Through Our Darkest Days”, although it is typically infectious and anthemic. What struck me most about this album was its depth and breadth. Light and dark are mixed, so it is hopelessly catchy yet thunderously heavy with all manner of subtle twists in between. The range of moods has been broadened here. On listening to it, I am left with riffs and choruses going through my head, and yet it can be so dark and shadowy as to be worthy of the title “Mercenary’s Greatest Hits – the Dark Edit”. Be prepared then for an interesting and exciting adventure.

The opening song “A New Dawn” heads off without ado. It sets the scene nicely with all the drama, melody, flying choruses and toe-tapping, head-banging attributes of a classic Mercenary track. Peter the drummer sets out a lively framework. Rene’s vocals are unusual, falling somewhere between screams and clean delivery. It’s a colourful and mobile track, bursting out of darkness into a clean and catchy melody. There’s a lot going on. But thanks to the seamless construction of the songs Mercenary always provide us with an unashamedly safe path in spite of all the elements. A little solo from Martin drops by. “We’ll never surrender … we will be strong forever” could be cheesy but it’s uplifting and powerful so I’m involuntarily singing it, as would anyone around me listening to it. Even the cat passing in the street would be singing along. Trite choruses are forgivable here because they’re so catchy. “Welcome the Sickness” moves up a notch. Rene screams as if a rocket has entered his posterior. The boundless energy gives way to a nice soulful chorus. The riff is intricate. Now dark clouds build up, the drum work is urgent, the screams are frantic and even the chorus line takes on dark proportions. Yet inside it there is reflection – “one man’s loss is another man’s pain” – yet even that is conveyed with irrepressible melody. The statutory solo provides a short cooling-off period and added pleasure. The integration of the solos into the body of the tracks is a noticeable development over the years. The theme is personal with surrounding dark emotions. As if to prove the point “Welcome the Sickness” ends with a thunderous sound like a continuous explosion.

It gets even better. The build-up of the title track heightens the intensity and takes us into the realms of epic, sweeping darkness. “Through Our Darkest Days” is another part of this magnificently evolving drama. Rene issues his appeal to the accompaniment of a rich and emotional instrumental line. As he growls, there’s a dark and unsure world being created. As ever the music blends beautifully like top-quality motor oil. Martin’s solo is thoughtful and inspiring. Returning to the “Never Surrender” theme, Mercenary do what they are so good at. Here they have constructed a completely harmonious composition with a whole lot of aggressive and softer elements. It’s always subtle and as they bewitch us, they return with familiarity, in this case the chorus that we know, are comfortable with and can share. There was a similarity with “The Hours that Remain” about this track, I thought. “Through Our Darkest Days” is utterly hooky. To follow, “Dreamstate Machine” is another extreme example of a catchy melody in an aggressive framework. Again the chorus is gripping and like a friend sucks us in, gains our trust and takes us into a fantasy world. “In a state of make believe, we seem to be taking on a new belief”, we sing. Meanwhile the guitars and drums pack a powerful punch. It’s heavy as hell. Behind the scenes, there’s an eerie keyboard sound, provided by the ubiquitous and multi-talented guest Kim Oleson of Anubis Gate amongst others. Any sense of comfort is broken by a big scream. The atmosphere is now dark and sinister. I’m not sure if this a good place but the music is mobile and Mercenary take us by the hand and guide us through the dark shadows and the obstacles. The drama is immense, in fact far greater than I recall from Mercenary in previous times. We’re hitting the extremes of emotion. To order, the magical and inspiring chorus greets us and takes us over again. We sing along. It’s unbearably gripping. The timing is immaculate. It’s total entertainment.

A rumbling melody follows and there’s another killer chorus. “Every day could be the last one” we are invited to sing cheerfully. The drum on this song “A Moment of Clarity” and on the album overall has a real bassy quality. This is just one anthem after another. If there was a book on “How to write a melodic metal song”, these are the people to do it. This album is like a story which develops and reintroduces characters we know, until we’re inside it and participants ourselves. It flows, even when it momentarily slows and takes on a melancholic face. Never has “Every day could be the last one” been so inviting. I don’t feel lonely. I feel there are bright stars around me and I’m amongst friends listening to Mercenary. We’re all invited. If the composition of the tracks is good, so is the sequence of tracks. “Beyond this Night” is slower, darker and more melancholic than what we’ve heard so far. It’s self-questioning yet melodic as ever. Rene conveys pain and doubt. But this is no silly self-indulgent ballad. With its subtle rhythm and catchy and colourful drum line, it has a complete metal melody albeit with longer notes as if the day has become darker. There’s a nice ending from Mr Oleson on the keys. “Beyond this Night” has a special atmosphere. “Starving Eyes” takes us back to the world of lofty melodic metal. The loftiness is reflected in the lyrics: “1000 miles and still rising … visions will be stabilizing”. After a little keyboard break, Martin heads off with a dark solo. It’s perfect for the mood but not overstated as to unbalance the mood.

I came to the realisation, not for the first time of listening to Mercenary, that I was living and breathing this album. A track that I had slight doubts about was “Generation Hate”. Rene now screams “We are the Generation, Generation Hate”. This is more of a rock n roll track. There’s some nice funky guitar work, it’s anthemic and without doubt falls into the crowd-pleasing category. At first I wasn’t sure because the lyrics are quite banal but listening to it more closely, with its keyboard and slowed-down growled sections, it’s actually instrumentally more progressive and even experimental than others. “We are the Generation. Generation Hate”. Sing along now. Yes, it’s kitsch. I’ve never been totally convinced by Mercenary’s lyrics, yet they go through my head like a mantra. I must confess at this point to being guilty of the mis-hear of the century. What I heard as “Sell the salty maggots” proved, upon closer inspection of the lyrics, to be “Self-indulgent madness”. What an opportunity missed.

After the anthemic, experimental rock n roll kitsch of “Generation Hate”, the last track of the album is the expansive “Forever the Unknown”. Broad-based, it has a subtle and engaging riff as Rene and the gang reach for the skies and take us to higher places. Yet looking at the apocalyptic lyrics, it seems to be about betrayal and “hiding from the lies”. I’m not sure about that. It’s a lofty track but with a very dark theme. But I must say it’s musically very powerful too. As it happens, there was a bonus track “Holding on to Serenity”, on my copy. I always find bonus tracks curious. What’s the point – is it in there or isn’t it? At least in this case, it served to assuage my confusion over “Forever the Unknown” which I thought wasn’t the best track to end with lyrically speaking, even if it shared the musical richness of its predecessors. “Holding on to Serenity” is another piece of colourful melodic metal which takes a more defiant view than “Forever the Unknown”. It’s steady and straight but contains the power, punch and forward motion of a Mercenary track. At one point it seems to break out of the normal world into an interesting and distant-sounding metal chant. Rene opens his arms – well, that’s the picture I have in my imagination – and invites us to picture “a new divine in normality”. This is a bit strange as a concept but it’s better than platitudes and of course it’s musical heaven.

“Through Our Darkest Days” was produced and mixed by the master of melody Jacob Hansen. But the input comes from the band members. This album is about its quality of song writing and musicianship. The control in the rhythm department is supreme, the moods are majestic and the vocal range is amazing. But the strength lies in the flow and tight co-ordination. Great care and attention has clearly gone into blending these tightly-knit structures. The result is an album which not only is greater than the sum of the parts, but one which is spell-bindingly magnetic from beginning to end. In their distinctive way, these kings of melodic metal have given this album a deep soul. “Through Our Darkest Days” has all the sophistication, catchiness and mind-capturing moments you could ever want. Once again a Mercenary album has left me feeling fulfilled.