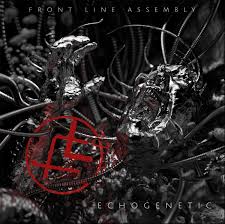 The realisation that Front Line Assembly have been going for 27 years now makes me feel very old, as there is a part of my brain that still sees the electronica and industrial revolution as a ‘new’ thing. After leaving Skinny Puppy in 1986, Bill Leeb formed FLA as an outlet for his own ideas which he didn’t have the freedom to express with Skinny Puppy. Once Rhys Fulber came on board shortly after, the momentum really started to build and they have been innovating ever since. There are not many bands or artists who have managed this sort of career longevity whilst constantly evolving their sound to take in the current trends, usually taking the safe option of sticking with what they know best and with what the fans expect. Bill Leeb has never been one to stand still though, and over the years he has dabbled with electronica, industrial, metal and occasional light drum and bass influences which continue to this day. Latest album ‘Echogenetic’ was a bit of a shock when I first heard it, although given the band’s propensity for experimentation I really should not have been at all surprised.

The first thing to note about ‘Echogenetic’, and this is definitely going to alienate a lot of you, is that the guitars are gone. This is a full electronic album, and I was wondering whether we would be returning to the early days where it was more about the experience and the musical soundscape rather than individual songs, especially after hearing the opening track ‘Resonance’, which sounds perfect for a dark Sci-Fi movie or game soundtrack, (an area to which they are no strangers, having recently provided the soundtrack for AirMech as well as contributing to the Quake series). It’s on ‘Leveled’ where the bomb really drops, or perhaps that should be bass as the immediate dubstep influence is pretty hard to miss. Initially I was downcast about this, but FLA have not gone all Skrillex, instead it’s just another musical style that they have managed to assimilate into their musical arsenal, and as they have done in the past when experimenting with styles it is handled sparingly, technically and in context. My initial concerns were alleviated over the course of the album and I actually found myself enjoying the ‘wub wub’ influence, especially on ‘Leveled’ and ‘Exhale’ in particular, which is a perfect example of how to introduce new styles and sounds without losing your own musical identity.

I’ve often found in the past that FLA albums can be hit and miss affairs, often with a few outstanding tracks and a lot of filler, however this is definitely not the case with ‘Echogenetic’. As an album it holds together far better than anything since 1994’s ‘Millennium’ although that is probably the only comparison that can be drawn between the two albums aside from the vocal style. There is a lot of variation in the tracks from the slow brooding Zeromancer style of ‘Blood’, to the cybernetic dance floor filler ‘Killing Grounds’ to the musical mechanics of ‘Prototype’, it all somehow comes together in seamless fashion. Overall it has a danceable feel to it which is a far cry from some of the earlier material which whilst usually technically brilliant, could often be described as rhythmically challenging.

I was disappointed to learn that the guitars had been dropped on this album and feared for the result accordingly; but it’s a reminder of just how talented Mr Leeb and his current crew of musical terrorists are that not only have they pulled this off, but to such an extent that I would consider this FLA’s most complete and cohesive album in a long time. This is the ‘Tactical Neural Implant’ for the current generation.