Steve Von Till – As The Crow Flies (Neurot) 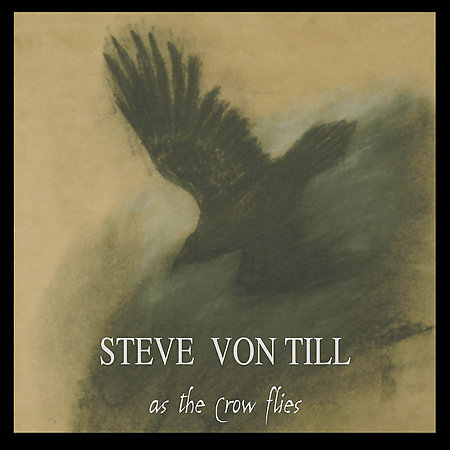 Hailing from the mists of 2000, this the first solo album by Neurosis man Steve Von Till and is more a “I wonder why now?” re-release than what I’d call a timely one. Neurosis fans will have it or not as their taste dictates and those who either have never heard Neurosis or suffer from that unfortunate malady of not liking them will possibly be staring at this somewhat blankly. So I shall not review an album by Steve Von Till. I shall review an album called As The Crow Flies. Deal?

Poise. That’s the first word that comes to mind here. This album has poise. It is a quiet, but clear, whisper of an album. I can’t avoid a brief mention of Neurosis as the framing of some melodies herein are so close to those eye-of-the-storm moments of Neurosis quiet that they brush fingers in passing. Just the storm here, if it ever touches, is one that has long passed towards the flat horizon and this is the delicate aftermath. Beautifully controlled, half sung, half whispered vocals and acoustic guitar form the loom upon which this album is spun. Occasional, but subtle keyboard use and strings of cello and violin, of additional voices, weave the pattern. The garment a masterful, poetic blending of post rock seamlessly joining colours like Godspeed! You Black Emperor and Amber Asylum (members of the latter being represented here) with a cobweb like sprinkling of the tone of Leonard Cohen and Jeff Buckley at their most minimalist. It is at turns, downbeat, beautiful and intense in its simplicity. The unshowy hands of a consummate musician who has mastered the touch of light and of shade to bring us a collection of music that lives in those short spaces of dawn and twilight.

This is an album that moves at its own considered, contemplative pace: It is introverted, yes, but still has the vision to show the listener a sometimes bleak, sometimes harrowing, sometimes simply thoughtful landscape. It brings me a stillness, standing alone in a plain of blacks and whites and all the greys in between with slowly shifting shafts of hazy light raising colour to the surface. It also possesses a sense of earth and of age: Not age in the style of music, that is genuinely timeless, but in the ideas it expresses. It is an album with deep roots and song names like Shadows In Stone and Remember coax from the landscape the history that lives in places.

So there it is. As The Crow Flies. Earthy, beautiful, measured, considered but washed watercolour like with emotions and uncovering more hues with its simple craft in the natural world than a thousand hours of Pro-Tools in florescent light stained cubes. This is the musical equivalent of a farmer with the earth under their nails and a sense of the weather to come.

The breeze shifts, the grey clouds thin, the sun touches the earth. Life goes on.