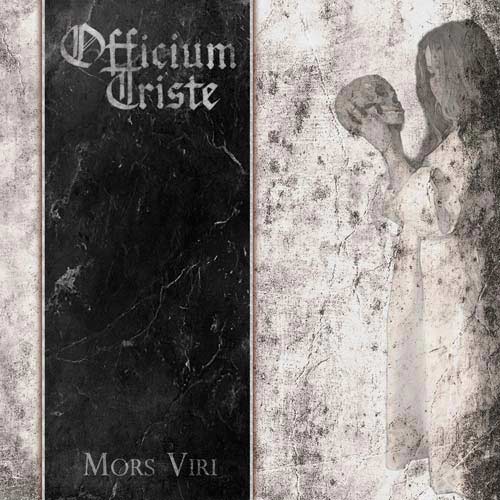 To my shame, I’ve not heard any Officium Triste until now, despite  this being the Dutch crews fifth full length album. I’d seen the name about here and there, but had pretty much written them off on the grounds that I didn’t like the name of their band. Look, I know it isn’t strictly a rational way of approaching a method to selecting what bands to listen to, but it’s gotten me to where I am now!

Mors Viri is a rather good album. With that out of the way, allow me to set you something of a checklist for enjoying the platter. Do you enjoy slow, emotional doom? Do you prefer the mid-periods of both Anathema and My Dying Bride? Have you ever wept into a lace hankie (from the eyes only)? If the answer to at least two of these questions is “yes”, then you have a winner here. This is incredibly slow, well-wrought doom/death with a penchant for a melodic keyboard accomplishment. I would give you something of a cliché to work with – maybe something along the lines of “November’s Doom and Evoken having a knife fight with Anathema”, but to be honest, I just can’t conjure up that appropriate mental image, and when I do, it moves so slowly that any of the protagonists in question could just up sticks and walk off without injury.

There are some particular highlights on the album, and to my ears at least, a couple of minor gems here that will be added to my playlist of the year. “To The Gallows” has a massively ear-worming melody, a combination of clean vocals, and the deep, hoarse bellow of Pim Blankenstein, who it turns out is currently the vocalist in 11th Hour, another great doom band. Elsewhere, “The Doomed and The Dying” has the temerity to break out into a jog and become a mid-paced anthemic stomper, complete with chugging palm-muted riffery, while “Burning All Boats and Bridges” has a grim melancholy not heard since the last time I span me some Runemagick.

This isn’t to say that everything is plain sailing. As much as I love the vocals, and Pim really does have an excellent gravelly set of bellows on him, the keyboards, with their saccharine wash of weepy-weepy wail-inducing melody do sit rather too highly in the mix for me. Occasionally, while listening to the album, it felt like I was being played some instrumental Dr Who incidental sound splashes from the late 80s. Elsewhere, while there are some cracking tracks on here, there is the nagging feeling that occasionally songs could do with a bit of a trim here and there to take off some of the fat. Indeed, it’s when OT move a little beyond the familiar tropes of doom/death that they are at their most successful. So chaps, next time, more like “The Doomed and the Dying”, please.