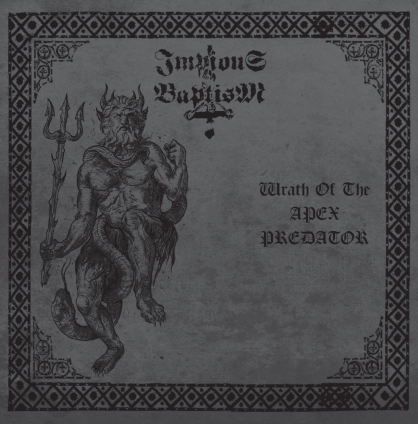 Not had anything from the lovely corner of the pit that is Hell’s Headbangers for a little while so this was welcomed into my abode. This is done by J, one man black metal arsenal from Australia and ex-everyone down that way it seems. So I settled back for some nice, nuanced symphonic gothic black metal.

Nah, just messing, course not: This is full on raw as meat on a butchers slab black metal with a binding of death metal and a few end of track interludes. It sits somewhere between the utter racket of Deiphago and a more structured but no less bestial death metal approach. A bit of Pact and Teitanblood tossed in maybe. That kind of thing. Yes occasionally the riff does clean itself up just a little so it can sit a tad closer to a little more orthodox European black metal style but mostly this is a wind tunnel full of rivets. Age Of The Firelords, for example, really just clatters on like Teitanblood on fast forward with the occasional dropping of a riff that Midnight might half glance at, just a little more straightforward dirty heavy metal before the beast swallows it whole again. The drumming is, I think you could say, functional rather than inspiring; it blasts relentlessly with little variation if commendable stamina and the crash sound is pretty irritating in places. But it does a job and glues things together perfectly so no real issue there.

By the time Arcane Funeral Rites comes about, I am pretty tuned in and the heavy death metal leaning beneath the thick, filthy noise is evident. It adds a lot more structure but to be honest I personally prefer this kind of stuff to flail around a bit more and the lead guitar is so buried beneath the riffs that you rarely notice it which is a shame.

Not to say this is remotely bad; J knows how to nail this stuff together and there is a real ‘in this for life’ commitment to the music that is excellent and comes across in the feel of the whole. Nothing that isn’t full blooded, hate fueled intensity. It is a fine, solid (and solid is a fine description of the density off the music herein) album of raw and virulent black metal. It doesn’t hit the highs of my favourite albums of this type and is a little lacking in those hidden claws that pull you fully into the songs but neither does it leave me cold. Good, full of feeling if just not quite wild enough to totally grab me. For a first solo full length though it’s a helluva marker to set down though so looking forward to the future from Impious Baptism, certainly.