The Beyond – Frostbitepanzerfuck (HPGD Productions) 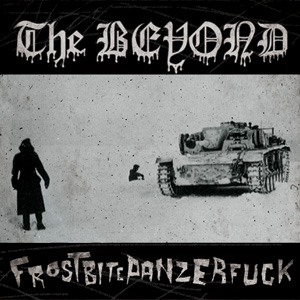 Ah we have not had one of these for a while, an album with a fuck off tank on the cover that is! If you take that along with the album title you are probably expecting something war-torn and nasty in the extreme. Well you might not be on the ball completely as The Beyond like to mix things up throughout this half hour slab of audio terror. Emphasis can be clearly put on the “old” as in “school” though as they worship everything from crust punk, death and black metal and give it all a coating of slime on these rather distasteful ditties.

Based in Harrisburg Pennsylvania these four miscreants claim “murder, rape, zombies and Satan” are their particular muses and who can fault them for that? Not sure what a ‘Roto’ is exactly but sure know all about what a “cunt” is. Mix them together and the first slab of obscenity and ‘Roto-Cunt’ is a riotous old crustbag of a number with sewer mouthed lyrics to match. Musically if you blend the likes of D.R.I. Circle Jerks, The Stupids, Hard Ons and bands of that ilk together you are going to be lying on the dance-floor with a broken ankle from twisting to this bitch. If the lyrics are too much you are best off pressing stop straight away as coming later is a cover of G.G. Allin classic scum-fuck ‘Cunt Sucking Cannibal’ and ‘Goat Sodomizer’ which sandwiches them neatly is going to have you bleating like one of those bitches at the PMRC.

It’s not all a one track sound though and after being confronted by piss in a bottle and shit in a bag goodness the title track rolls out slowly with doom laden intent after the previous speedy assault. Then it plows in and adds yapping death metal vocals with the sound of primitive blackness from the puttering drums and wasp attack guitars. It still has the bounce about it that will allow much pogoing and beer spilling but the game has somewhat changed. Onto the essential living dead number ‘Attack Of The Zombie Brigade’ and I have to wonder if Fenriz has heard this as the slew of Darkthrone partying with Autopsy in the boneyard could well have him giving them album of the week accolade.  Danny Starkiller mixes things up vocally and literally retching his guts over somewhat appropriately on ‘The Splatterhouse Maniacs” and of course everything is handled in the worse possible taste.

Ok this is not going to re-invent the wheel and it would be frankly ludicrous giving it a higher mark than I have done but if you are looking for half an hour of bad tasting musical extremity then this won’t let you down but is likely to be your bitch and lick your balls for good measure. Anyway as ‘Necro Overlord’ states they don’t give a fuck and I’m sure as long as the bodies pile up you can stick this up your chute and sit on it!