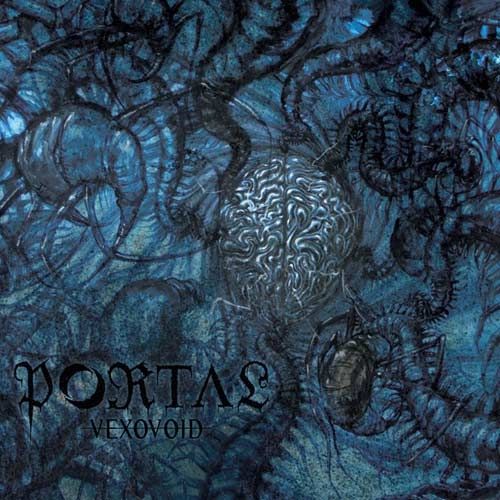 Look at that cover. That is a death metal album cover. Not some gore-grind pathetic rape fantasy, but a “Death Metal Album Cover.” You see that and you expect anvil pounding, brutal as fuck, heavy as Suffocation death metal. And you shall receive. Oh yes.

Portal come at this world through impossible angles. They seemingly only engage with our straight lines in passing, by enigma and by catastrophe. The shapes of their riffs fit our world with ill-ease, pushing and bending out of shape the well-travelled lines and disorienting us with spiralling sounds that seem to move backwards, curl inwards and threaten to drag us with them into somewhere we really don’t want to be. Even their ‘song’ titles cast odd shadows that don’t quite fit. ‘Kilter’, ‘The Backwards’, ‘Awryeon’, ‘Oblotten’.

Heralded as ever by the sudden thunder of drum and down-tuned guitar in unison, ‘Kilter’ is perfect Portal. It begins with an abyssal riff that seems normal, but like the pressure valve on some rusted, unknown engine it simply keeps on tightening. It does this past the point of normal, spewing vented black seepage in sudden whirls and hurtling downwards long after the engine has ripped free of its moorings. Vocals are a rumble buried in this thick miasmic violence, a reminder that there is intelligence in these folds; virulent intelligence.

‘The Backwards’ is the sound of winding. “Winding”, it’s a word that fits. Their sound winds. Spirals, usually inwards whilst impossibly seeming to expand. It reminds me of the line from Algernon Blackwood’s classic tale of the inexplicable ‘The Willows’; Our thoughts make spirals in their world.

‘Curtain’ cuts off your last retreat. Ponderous drum sounds, the rattling, punishing riff. From here on you are either out or lashed to the engine until it stops and the steaming corpses slither to the shed floor. Slow steps alternate with that vibrating, humming sound that surrounds Portal and just for a moment you are left between things as the sound fades. Before ‘Plasm’ arrives and grinds and blasts you and pulls you down even further into a sparse, static and drone passage beneath the engine room.

Here on ‘Vexovoid’, even with their past recordings, Portal have outdone themselves. This is hugely visual music as your brain tries to arrange it in some order. It is the darker stare of those who moved in step with but removed from Lovecraft; writers like Thomas Ligotti and Laird Barron. This is your first half glimpse of Silent Hill’s Pyramid Head, Hellraiser: Hellbound’s Leviathan. Shapes that are obscure, unexpected. Shit and blood crusted metal warped by black hole riffs. A wind howling on the edge of nowhere entirely sane.

‘Awryeon’ brings a low dirge to the room, ‘Orbmorphia’ brings the relentless pull followed by ‘Oblotten’s’ discordant and fluttering clouds of notes suddenly and utterly excoriated by the final, tearing riff and the lone, final notes.

You have no idea how much time has passed. By others standards it would be hours. Portal spend only the time they need. Nothing is too long. Neither does this ever degenerate because we are dealing with elemental blocks.

If you have encountered this doorway before, has much changed? Little but something and in important ways. This is Portal at their most surreal; pieces of sound lurch and twist at you but pull the riff with them. If after ‘Outre’, ‘Swarth’ was almost thin and sane by comparison, if lightning fast in parts, then ‘Vexovoid’ is the sucker punch. The sound is richer, darker, far more dense and the backwards riffs smother and crush rather than hack at you. There is more purpose to ‘Vexovoid’. The vocals lower, more buried. Even that deceptive speed is crushed to the point of singularity.

If you have never dared Portal then simply beware because to follow the thinking of Lovecraft, this is stepping off our blissful isle of ignorance into vast seas of what should not be. Without gore or other carnival sideshow shocks this is death metal that is, simply, utterly, Wrong.

Numbers become meaningless but in time the one below can only grow.